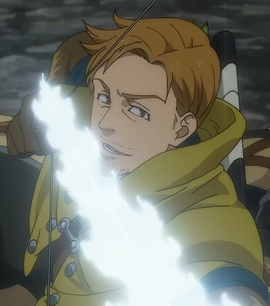 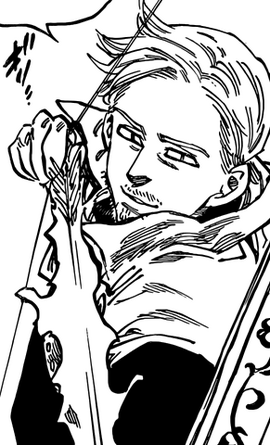 Weinheidt「ワインハイト」 i a member from the group of Holy Knights, Dawn Roar and is the marksman of the team.

Weinheidt is a well-built man with a short beard and mustache and wears a set of medieval archer clothing with a small cloak draped around his shoulders.

Like the other Dawn Roar members, Weinheidt is willing to kill anybody for the mission. He is faithful to whatever mission his team is assigned to and doesn't care about the motives behind the mission as long as the job gets done, although he can be curious sometimes.

Despite the Holy Knights' coup, Weinheidt retains his loyalty to the king along with his teammates when Bartra ordered Dawn Roar to stop Slader from hurting himself, to which Weinheidt complied.

Not much is known about Weinheidt's history but at some point of time, he joined the newly-formed Dawn Roar after the Seven Deadly Sins disintegrated ten years ago.

Under orders from Helbram, Weinheidt and the Dawn Roar travel to Ordan where a local knight spotted an armored giant in the forest. Once Slader and the Dawn Roar travel to the location, they bring along a group of knights which were beaten or killed by the Armor Giant who is the Seven Deadly Sins member, Gowther. Weinheidt goes to the top of a hill with his arrow ready. Slader orders the group to make a stand-off against Gowther, until he makes a move. Slader and the rest wait for half an hour until a young boy named Pelliot comes to them and attacks "Gowther", thinking he is a dangerous criminal.

"Gowther" is about to smash Pelliot until another boy named Armando arrives and saves his life but gets crushed instead. Slader and the rest take this opportunity to attack "Gowther". Ban rushes toward Weinheidt to stop him from shooting Gowther with his arrow, however Weinheidt reveals that he is an illusion and he knows about them hiding in the forest. Weinheidt, who is really hiding in a pile of bodies, reveals himself and shoots a fully charged arrow at "Gowther." This arrow is stopped by Armando who reveals himself to be the real Gowther much to the Sins' shock.

Shortly after Armando reveals himself to be Gowther, he removes the head of the Armor Giant and gives it to Weinheidt and the Dawn Roar. After leaving, the Dawn Roar rest and discuss among themselves of what has transpired as Weinheidt asks his captain's permission to take a look at what is inside the Armor Giant's head but he refuses due to their mission, then he changes the subject about the New Generation, believing that they were assigned to this mission because he thought that the former Apprentice Holy Knights might not be able to handle it as they aren't on the same level as the real Holy Knights. Little did Weinheidt or any of his teammates know of Jericho's presence as the latter eavesdropped their conversation.

Weinheidt and the other Dawn Roar members witness Slader's valiant attempts to save the royal family, but unable to do so due to the Perfect Cube spell placed by Vivian. Bartra orders the Dawn Roar to stop Slader from harming himself at which they immediately do but Slader refuses to leave Bartra, despite the Dawn Roar pulling him away. Later when the Seven Deadly Sins and Dreyfus' group suddenly appear out of nowhere via Merlin's teleportation, Weinheidt and his teammates were alarmed of their presence and readied their weapons just in case. Later Weinheidt assist in Dreyfus' arrest after the former Great Holy Knight confess his crimes and willingly surrenderes. When the castle is destroyed by Hendrickson, Weinheidt is surprised but manage to save himself.

While escorting Dreyfus, Weinheidt is killed.

Weinheidt's corpse is placed in the morgue alongside Jillian's and Hugo's where Slader and Simon mourn for their deaths during the National Foundation Festival.

His ghost is one of many haunting Fraudrin after he is cursed by Denzel.

As any other Holy Knights, Weinheidt is very powerful, as he handle himself against the Deadly Sins. Weinheidt can cast illusion to escape from attacks, could sense powers like the Deadly Sins, and he is able to charge up his bow to unleash a powerful attack.

Weindheidt wields a bow and a set of arrows that works in conjunction of his power to charge up powerful arrow attacks.

In the Kingdom Infiltration arc, Weinheidt and the majority of Dawn Roar were with Slader in the king's bedchamber and stopped their captain from hurting himself in Bartra's orders and was seen overseeing the arrest of Dreyfus after he admitted his crime of murdering Zaratras and framing the Seven Deadly Sins but was later killed by the former Great Holy Knight; but in the anime, Weindheidt was with Dawn Roar on another mission and participates in cleaning up the New Generation mutants in the city and later appears at the side of their king in the National Foundation Festival.

The deaths of Weinheidt and the other members of Dawn Roar is eventually brought in line with the manga during the second season.

Retrieved from "https://nanatsu-no-taizai.fandom.com/wiki/Weinheidt?oldid=141145"
Community content is available under CC-BY-SA unless otherwise noted.