The Weird Fangs「, Wiādo Fangu」 is an order within the Holy Knights assigned to Baste Dungeon. The group consists of four members, each with distinct abilities.

The Weird Fangs was formed without any formal permission from king Bartra Liones.

Five years before the beginning of the series, the Weird Fangs confronted Ban of the Seven Deadly Sins. The resulting battle ended in Ban's intended capture and imprisonment in Baste Dungeon, where they remained as the dungeon's four guardians.

As Meliodas and his companions enter Dalmary Town, they are spotted by Friesia's spy bug and the Weird Fangs decide to launch a preemptive attack on the two Sins. Friesia is the first to go and set loose her swarm of corrosive-spitting insects upon the town, with no regard for the civilians caught in her attack. However, Diane, despite her fear of bugs, annihilates them with a Creation technique, leaving Friesia baffled and the Serpent's Sin of Envy decided to deal with the rest of the Weird Fangs herself. Golgius, having used Friesia's attack on the town as a distraction, infiltrates doctor Dana's clinic and attempts to steal Meliodas' broken blade and Elizabeth Liones after the doctor poisoned the captain of the Deadly Sins but soon flees for his life after being threatened by a miraculously revived Meliodas' raging black aura. Golgius would later run into Meliodas, Elizabeth and Hawk, and soon attacking them. Though he had an upper advantage, he is soon defeated. Golgius then flees back to the dungeon.

Despite the setback, Ruin decides to join in the fray and uses his hypnotic illusions on Diane and then Meliodas into thinking that either of them is him, thus beginning a destructive battle between the Sins. Friesia also joins, as she uses her bugs to attack a farmer's son, to taunt Elizabeth of her resolve to save people. But the princess of Liones walks right into the swarms of bugs, not caring whether she might die only caring to save the boy. It is reveals that the boy Elizabeth just saved from Friesia is actually Ruin in disguise and the Holy Knight nearly beat her to death. Though moved by her courage, Ruin reveals the secret behind his abilities, only to reveal that the girl had removed the bell from his staff with her teeth, which causes the Holy Knight to go berserk and attempts to kill her off, but Meliodas, having been freed from the hypnotic illusion, intercepts his attack just in the nick of time. This exploded into an all-out battle between the Weird Fang and the Deadly Sin, as Ruin angrily wonders why the kingdom fears such a small child and taunts him to use his weapon as he repeatedly pummels Meliodas to the ground with his metal fists. Believing that his merciless attacks have reduced Meliodas to a pulp, he is punched back real hard and his armor is broken by the Sin, revealing to be completely unharmed. Casting off his armor, Ruin claims that his incredibly hardened skin is his true armor only for Meliodas to punch him in full power, breaking through his ribs, making Ruin to cough up blood. Then the Dragon's Sin of Wrath sent the Holy Knight flying into Baste Dungeon with another punch, destroying large sections of the prison. Friesia, on the other hand, is smashed to near death into the ground with her armor nearly destroyed by Diane, already being freed from Ruin's illusion.

Meanwhile, Jude went to intercept Ban who just escaped from his cell and found him at Sennett's cell. The Holy Knight attacks the Fox's Sin of Greed and corners him, telling him that his role to lure the Seven Deadly Sins is over and will be eliminated. However, Ban reveals his reason why he let himself captured 5 years ago and being tortured by Jude only to feel alive if he does so. The Fox's Sin of Greed removes the weapon from his chest and stabs the Holy Knight to death. As Jude spout his last words stating that if the Seven Deadly Sins were to plot to overthrow the kingdom again, the Holy Knights of Liones will declare war against them, Ban happily claims that it might really be enjoyable if that happens.

Running out of options to defeat the Seven Deadly Sins, Golgius resorts to use the Incantation Orb to cast the Eternal Seal Spell on Baste Dungeon, claiming that not even ten Tyrant Dragons could break out from such a powerful sealing spell including the Sins themselves. This, however turns out to be a failure, as the sealing spell surrounding the dungeon was destroyed due to Meliodas' and Ban's way of greeting and arm-wrestling. Their antics destroyed the whole dungeon and freed the people who were wrongfully imprisoned by the Holy Knights. Golgius and his subordinates express their shock and panic, fearing for their lives.

Friesia and Ruin have their souls eaten by Fraudrin. Golgius manages to encounter Hawk Mama and escape death. 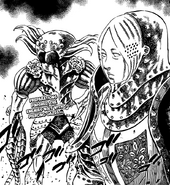