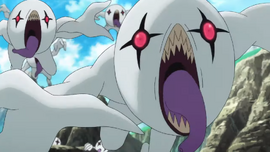 White Demons (alternatively called White「 Howaito」) are a family within the Demon Clan.

They are the smallest demons shown so far, bipedal, and white in color. They possess small red eyes shadowed with a black cross on both and have long, purple tongues along with rows of sharp teeth.

They don't seem to possess much intelligence or show any emotions, other than a desire to attack anyone in their vicinity that isn't part of the Demon Clan.

A group of White Demons attack a pair of humans in the mountains. However, all are eliminated by Hendrickson and Dreyfus using their Combined Technique: Holy Shock.

Various White Demons are part of the Demon Clan army that is faced by the Holy Knights during the Holy War. Some of them are eliminated by the knights. One of them is killed by Arden's arrows.

During the second wave of the army, some White Demons are eliminated by Matrona's Daichi no Kiba. White Demons tries along with several other demons to devour Elaine when she falls, but all are killed by Ban.

Retrieved from "https://nanatsu-no-taizai.fandom.com/wiki/White_Demons?oldid=151480"
Community content is available under CC-BY-SA unless otherwise noted.