The Light That Drives Off Darkness 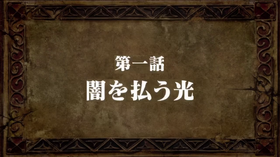 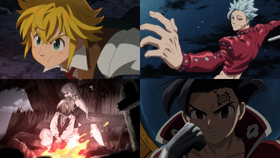 The Light That Drives off Darkness「闇を払う光 Yami wo Harau Hikari」 is the first episode of Season 3 of the The Seven Deadly Sins anime.

Some time after the battle to defend Liones, the Seven Deadly Sins keep on their mission to protect Britannia's villagers from demons who pretend to conquer the country and sacrifice as much souls as they can. After successfully saving a village where Pelliot and his family lives, the Sins are informed by Bartra that all seven members will once again assemble soon. Meanwhile at the Fairy King's Forest, King and Diane meet again in a shameful situation.

In Liones, Howzer and Griamore are helping out to rebuild the destroyed buildings. Griamore tells Howzer that soon there will be held a new ceremony to appoint a new Great Holy Knight and Howzer gets excited wondering if Dreyfus or Hendrickson would be chosen. As they help out, Howzer is amazed by how much Merlin had helped in rebuilding the castle, but Griamore explains that while the buildings are repaired, the people's morale would take more time to return to normal. This motivates Howzer, wanting to help even more.

Ban and Meliodas start a campfire to rest and eat. Ban is happy they could fight again, but comments that what he did to Fraudrin was on a completely different level than his usual strength. Meliodas then recalls the moment with Elizabeth were he told her that he was afraid he may revert to what he used to be, but Elizabeth assured him, she will be always by his side. Ban then also assures him, that he will always be his friend and wonders what they will be doing now. Meliodas said that they had saved the people Bartra Liones had asked and they next goal is taking back the castle of Camelot, but there is something they have to do first.

At Ordan Village, Pelliot comes out of his house running and carrying a bag, a man praises him for helping out his father, but Pelliot tells him this was training. He then see his father speaking with a man and sneaks on the window to peek what was going on.

In Camelot, Zeldris gets informed about the attack on the convoy and the lose of the prisoners, but they do not know who attacked them. He then checks on his brother Estarossa who was still unconscious and recovering from his last fight, also remembering the dead and missing Ten Commandments. As he left, Estarossa wakes up remembering his brother Meliodas and Elizabeth.

Meanwhile in Ordan, Pelliot discuss with his father, who was preparing traps for travelers, asking him to not capture people for the demons, but his father tells him he was doing it to protect him. As Pelliot could not to convince his father, annoyed he decides he will defeat the demons himself and run away. Pelliot then sees a man handling a cart with prisoners to an Ochre Demon, but the demon is not happy as there were not enough humans and wants to take the man too. Pelliot then jumps in to save the man, but gets easily knocked down. The demon decides to make an example out of the kid and starts beating him up in front of his father and the other villagers. However, Pelliot gets up, saying he will never give up. Encouraged by this, his father attacks the demon with the other villagers backing him up. But all of them get easily defeated by the demon, who then grabs Pelliot wanting to kill him first and make him scream. But then a scream is heard from one of his demon companions. The Ochre Demon turns to see the Seven Deadly Sins standing on top of a defeated demon. The demon orders the other demons to kill the humans. Two Gray Demons attacked, but are easily killed by Meliodas and Ban. A Copper Demon then attacks and starts punching Escanor. The Ochre Demon tries to kill Pelliot, but Gowther uses his power to make him start hitting himself. The Copper Demon realizes his attacks were not doing anything and Escanor easily split him in two with his Sacred Treasure, Divine Axe Rhitta . A Silver Demon faces Merlin, absorbing her magic attacks to power himself up, but still is easily defeated by her. Seeing all that the Ochre Demon called even more demons, but they got defeated by Meliodas who reflects all of their attacks. Ban then take the Ochre Demon's heart and crush it, killing him. After Elizabeth healed the injured people, they left the village.

Back in Liones, Hawk is waiting, wanting to show all of the Seven Deadly Sins the renovated Boar Hat, but Ban and Meliodas revealed it before him, much to Hawk's annoyance as he wanted to do it. Meliodas asks Elizabeth what does she think of it, and she likes it. Hawk told her that Meliodas did not had anything to do with the renovation. Meliodas tries to say that he paid for it, but Hawk knew that the king paid for the renovation.

Speaking in front of everyone, Bartra says that as while they had peace, they still had to deal with the rest of the Ten Commandments. He then proceeds with the appointment of the new Great Holy Knight. Howzer is excited and says he will support both Hendrickson and Dreyfus, but is surprised when Bartra ends up choosing him. But as he is inexperienced, he would be a Substitute Great Holy Knight, and as he get support by the other knights, Howzer accepts the role. A bit later, before the Sins left, Bartra told Meliodas that he had an omen as to when the Sins will be reunited.

At the Fairy King's Forest, King is taking a bath when Diane also comes to take a bath and they get shocked seeing each other naked.

Retrieved from "https://nanatsu-no-taizai.fandom.com/wiki/Wrath_of_The_Gods_Episode_1?oldid=150062"
Community content is available under CC-BY-SA unless otherwise noted.