That Is Our Way of Life 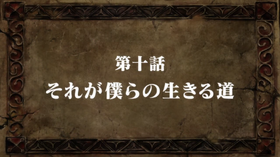 That Is Our Way of Life「それが僕らの生きる道 Sore ga Bokura no Ikiru Michi」 is the tenth episode of Season 3 of the The Seven Deadly Sins anime.

Meliodas reveals to the rest of the Seven Deadly Sins the secret behind his relationship with Elizabeth and how they were punished for that.

Seeing no reason to keep it a secret, Meliodas reveals to the rest of the Sins that he and Elizabeth have been cursed 3,000 years ago by the Demon King and Supreme Deity respectively: he will be immortal and never die, and Elizabeth will constantly reincarnate each time she dies, where Meliodas will be forced to watch every one of her deaths. This was due to them forming a relationship despite being from the Demon and Goddess Clans.

After the Holy War ended, Meliodas wandered the continent listlessly upon discovering the original Elizabeth dead beside him, only to meet with her new reincarnation, now a primitive human with no memory of him. As they relationship slowly deepened again, the new Elizabeth's right eye suddenly got a Goddess symbol, confirming Meliodas' suspicions of her being an reincarnation, and narrates the past to her which prompts her left eye to take on the symbol as well. Elizabeth, having regained her memories, then tells Meliodas of their respective curses, and reveals how she will die three days after regaining her memories.

As of date, Meliodas has met 107 Elizabeths, some of which had regained their memories and some that had not and died peacefully.

Meliodas then decided to work with Merlin to break the curse, with their only lead being Zeldris, who is able to borrow the Demon King's power, but this requires reopening the Coffin of Eternal Darkness where the Ten Commandments were sealed.

However, Fraudrin was soon restored by demon worshippers after sacrificing all the citizens of Danafor, and killed Liz, Elizabeth's then reincarnation, to use her Goddess blood to reopen the Coffin, although it fails. Meliodas then destroyed Danafor in anguish and rage, only to rediscover the newborn child of a woman to be the present Elizabeth.

Retrieved from "https://nanatsu-no-taizai.fandom.com/wiki/Wrath_of_The_Gods_Episode_10?oldid=147929"
Community content is available under CC-BY-SA unless otherwise noted.