The Grudge Ones Doesn't Sleep 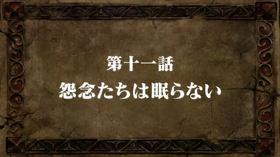 The Grudge Ones Doesn't Sleep「怨念たちは眠らない Onnen-tachi wa Nemuranai」 is the eleventh episode of Season 3 of the The Seven Deadly Sins anime.

The Seven Deadly Sins arrive to the city of Corand where Meliodas falls for a trap of Melascula from The Ten Commandments. She is planning in taking out the group by herself but when her first plan fails she cast a spell on Diane allowing her to be controlled by the grudgeful spirits of Corand's citizens.

The Seven Deadly Sins approach the ruined city of Corand which is said to be the source of a dimensional warp that is preventing them from accessing Camelot.

Helbram reveals that he was the person who massacred the entire city in his hatred against the humans.

On approach they notice Zeldris waiting at the entrance. Meliodas attacks him instantly only to find out it was a trap set by Melascula. She traps Meliodas in her darkness and gets the other sins to fight an army of skeletons powered by the trapped captains dark energy.

Diane's mind gets taken over by the hateful thoughts of the killed people. Gowther uses Invasion to try to help but fails. Helbram offers himself as the culprit responsible to appease the tormented souls, but is not still not enough to save Diane.

Then, Elizabeth appears and using her Goddess' power, saves her.

Retrieved from "https://nanatsu-no-taizai.fandom.com/wiki/Wrath_of_The_Gods_Episode_11?oldid=149997"
Community content is available under CC-BY-SA unless otherwise noted.