Love is a Maiden's Strength 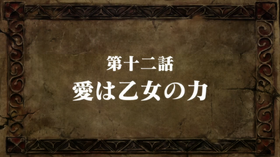 Love is a Maiden's Strength「愛は乙女の力 Ai wa Otome no Chikara」 is the twelfth episode of Season 3 of the The Seven Deadly Sins anime.

After Diane is saved, an enraged Melascula turns into her true demonic snake form to finish up the battle but, thanks to Elizabeth and Elaine's intervention, she is defeated. However, Meliodas turns into his old self, the feared leader of the Ten Commandments, and engages in a ferocious fight against Escanor.

After Elizabeth saves Diane with Elaine's help, Melascula regrets her plan failed again but now she has the perfect chance to get rid off of Elizabeth, leaving Meliodas still trapped inside her darkness cocoon.

Elizabeth uses Invigorate to heal both Diane and King from their injuries. Diane apologizes to King for what happened and Ban nags out Elaine for being careless with herself. She says she does not care and curiously ask to Elizabeth which identity is she currently "holding". Elizabeth replies she is both, the same Elizabeth of the Goddess Clan from 3,000 years ago and Liones' third princess. She then aks Merlin about Meliodas' whereabouts, recalling how different is from her old self and even reveals how Merlin used to call her "sis-sis" to the shock of everyone else.

Escanor request to hear the story of Merlin with Elizabeth infuriating Merlin until Melascula shows up. She is irked by the current situation, denigrating Elizabeth for her forbidden romance with Meliodas and notes Elaine is the fairy who brough to life as a side effect of her resurrection spell. Melascula undergoes a transformation to show her true demonic form: a big monstrous cobra snake. She attacks Ban for mockingly stating her true form actually fits her personality and plans to get even for the time he destroyed her six hearts and messed up her jaw.

Even though Elaine tries to save him, Ban insists her to run away to be safe, but she refuses as he always is protecting her and she wants to protect him back as well. She flies right into Melascula mouth and saves Ban. Elizabeth is glad to see Elaine feelings for Ban are reflected in her new form. Elaine, who has sprout out a beautiful pair of wings hugs Ban, is relieved as Melascula gaze at them frustrated.

Suddenly, everybody feel a quake from the distance and deduce is Meliodas escaping the cocoon of darkness, Melascula is shocked as breaking free from her cocoon is not easy not even for the rest of the Commandments, not even Zeldris holding a part of the Demon King's power. Escanor notes something is off. Calling his Sacred Treasure Rhitta, Escanor goes where Meliodas is in order to confront him. Melascula comments that Meliodas is in his Assault Mode, the feared leader of the Ten Commandments back then, and that is the end for them and her.

Merlin creates a Perfect Cube around Escanor and Meliodas so they can fight with their full power. Escanor joyfully states is the perfect time to prove he is the strongest but Meliodas, reverted to his old self, is willing to prove him wrong and they start fighting.

Meanwhile, Melascula is ready to take out Seven Deadly Sins all by herself. Ban uses Fox Hunt searching for her last remaining heart so he can kill her but she reveals it is futile as she can freely move it anywhere in her body and she attacks him with her poison.

Elizabeth saves Ban by healing him with her Goddess Magic. Diane and King otherwise confront Melascula with their new magic strenght which surprises Melascula who for a moment believes is at the level of Gloxinia and Drole and she falls defeated. Merlin explain to Melascula she lost because she underestimate them. Melascula considers escaping the battlefield but Elaine reads her mind and corner her with her Tempest Falls in order to get rid of her even when that means she will die as well. Elaine asks Merlin to kill Melascula off, as Elaine farewells to Ban once again, Elizabeth interrupts and uses Tranquilize expelling all of Melascula demonic miasma turning her in a little snake.

Hawk scares off Melascula who runs away until she is captured by Merlin. Elizabeth explains she knew Melascula was actually a snake who became a demon by bathing in miasma from the Demon Realm many years ago.

Back at the battle of Meliodas and Escanor, the battle is seemingly won by Meliodas who viciously stabs Escanor in the stomach

Retrieved from "https://nanatsu-no-taizai.fandom.com/wiki/Wrath_of_The_Gods_Episode_12?oldid=149031"
Community content is available under CC-BY-SA unless otherwise noted.