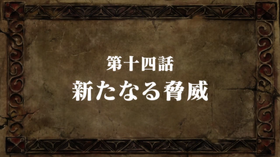 A New Threat「新たなる脅威 Aratanaru Kyōi」 is the fourteenth episode of Season 3 of the The Seven Deadly Sins anime.

Committed to the task of rescuing Meliodas, Zeldris attempts to gather the remaining Ten Commandments, but get no response. Chandler and Cusack, Meliodas' master and his own respectively, appears. Chandler offers to personally rescue Meliodas whom he easily finds and manages to put the Seven Deadly Sins on the ropes.

The Demon King himself orders his youngest son to save his brother Meliodas in order of bringing back to the Demon Clan. Initially Zeldris refuses but his father tells him he will be on their side as he is desperately looking a way of breaking Elizabeth Liones' curse. Reluctantly, Zeldris then proceeds to summon the rest of Ten Commandments.

Due to getting no response from his allies, Zeldris recalls of what happened to most of them: Galand was defeated and turned to stone by his own Commandment, Grayroad and Melascula were both captured by Merlin after their defeat, Estarossa is still in coma and Fraudrin died a few weeks ago in his battle with Meliodas. The four members left; Gloxinia, Drole, Monspeet and Derieri, in contrast are not interested in coming back.

Both Derieri and Monspeet are living in a village posing as regular humans, they talk about how they agree to not coming back, eventually they are visited by a village girl who is responsible for taking care of them as she believes they could be goddesses from a fairy tale. Gloxinia and Drole at the other hands are in the reign of Giants and they answer Zeldris call acknowledging it is too late to regret their actions but they are willing to fight the Demon Clan nonetheless. After they both refuse to help Zeldris their marks of the Commandments fade away as Gloxinia notes his mark is gone but refuse to check Drole's that was located in his butt.

Disappointed, Zeldris for a moment considers to do the job by himself until he is greeted by two members of the Demon Clan. They are introduced as Chandler the "Pacifier Fiend" and Cusack "Napping Reaper", who just released themselves from the Goddess Seal and are aware of the current situation of their clan. Cusack laments Zeldris would not be the first choice for the Demon King title and Zeldris replies he cannot understand his father's way of thinking. Chandler is jealous because unlike his disciple, Cusack's is still faithful to the Demon Clan and is convinced Meliodas is not a traitor but was manipulated by Elizabeth from the Goddess Clan. As soon he learns where Meliodas is, Chandler flies away to rescue his beloved pupil.

In the Boar Hat's roof, King gives to Diane a pendant made with his bended helmet as a souvenir of his late friend Helbram. Initially Diane is not sure about taking it as she feels responsible for Helbram's vanishment but King tells her Helbram supported them at the end. Gowther shows them a similar pendant made with his heart. He considers the whole meaning of a pendant as pointless but he is also happy to have something to remind him of his precious time with Nadja Liones.

Suddenly, night falls in their way to Camelot and Chandler appears inside the Boar Hat next to the Perfect Cube where Meliodas is locked in with Elizabeth. Elizabeth asks him who he is but Chandler is angry at her and describes her as a sinful Goddess who stole away his young master's heart. He tells her he will never ever forgive her and burts out Merlin's Perfect Cube. She tries to seal his magic but to her surprise, hers is sealed instead, as Chandler uses Full Counter as he was the one who taught Meliodas, turning Merlin into a little girl.

Diane grabs both Meliodas and Elizabeth to take them safely but Chandler teleports outside and realizes they are the Seven Deadly Sins. The Demon tells them to hand over Meliodas and Elizabeth so he can take back his master back to the Demon Clan. When they refuse, Chandler attacks them. He start by shrinking Diane and casting a meteor rain to corner them. Merlin tries to wake up Escanor but, as Chandler's presence brought night itself, he became powerless. As they are the only sins able to fight back King and Gowther then combine their magic to launch a fulminant attack: Celestial Arrow.

Retrieved from "https://nanatsu-no-taizai.fandom.com/wiki/Wrath_of_The_Gods_Episode_14?oldid=149486"
Community content is available under CC-BY-SA unless otherwise noted.