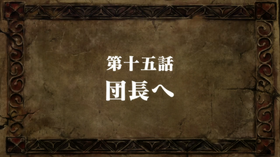 To the Captain「団長へ Danchō e」 is the fifteenth episode of Season 3 of the The Seven Deadly Sins anime.

The Seven Deadly Sins fight back Chandler with all they got. But the Pacifier Fiend proves to be way too powerful and undergoes a transformation as a final attempt to take back Meliodas.

A confident Chandler tells both King and Gowther their attack will not work on him as he can use Full Counter like Meliodas does. Gowther then reveals to King they should hit their rival at a specific moment in order to win the upper hand. Gowther shoots the arrow, but Chandler deflects it with Full Counter. However, the demon realizes the first attack was actually an illusion and the real Celestial Arrow hits him causing a massive explosion.

Believing they defeated Chandler, King tries to wipe out an army of demons who were drawn by the battle. Gowther realizes it is a trap but it is too late and King is hurt by Chandler's Full Counter who used an illusion as well in order to counterattack. Gowther is confused as he was sure Chandler was hit by the attack. Chandler reveals that indeed it was the case but it did not affect him as much as he thought.

He then uses an spell called Absolute Order on Gowther to be sure he will not attack him again. He approaches Elizabeth and Meliodas and attempt to kill her with a piercing attack. Diane protects her using Heavy Metal surprising Chandler who feels nostalgic as he used to fight Giants. Chandler chooses another attack a powerful magma spell capable of melting even the Giants' armors.

They all are saved by Ban, annoying Chandler who asks him what he is. Ban replies he is human. Chandler is shocked his beloved pupil is around the rest of the four Clans who were enemies many years ago. King hits him with his Chastiefol Guardian Form and claims even though their race were enemies they are together because it was meant to be. Chandler cannot quite understand their thinking so he challenges King to reanude their fight as he is sure their existence is irrelevant to Meliodas' happiness. Diane fights him while he is exchanging attacks with King, claiming their friendship is as precious as Elizabeth's love for Meliodas or hers for King or Ban's for Elaine or Gowther's for Nadja. Ban grabs Chandler from behind and offers to retain him while King attacks them both with Increase. Chandler realizes Ban is immortal so he destroys his body in order to escape and keeps his fight with King. King recalls for a moment when he first met Meliodas and how kind was to him, even called him a wonderful king and therefore King wants to return the favor.

Hawk asks Gowther why he is not helping the rest. Gowther reveals to Hawk that if he breaks the spell Chandler casted on him, his body would be destroyed. Then Hawk boldly approachs Chandler and licks the curse mark on his hand to erase it. Gowther then attacks Chandler while Elizabeth heals Diane, Ban and King allowing them to fight back Chandler, who is apparently defeated with one of King attacks.

While everyone is celebrating, Gowther falls limply to the ground as a consequence of the Absolute Order seal that Hawk checks in shock that was not actually removed.

Meanwhile, in Camelot, Zeldris and Cusack discuss the current situation and share a cup of tea. Cusack asks Zeldris if he thinks the Seven Deadly Sins have an advantage now that Chandler was defeated but Zeldris replies once Chandler believes he is losing Meliodas he releases his full strength.

Back in the battlefield, Chandler suddenly gets up again and undergoes a transformation as he tells the Sins they should be happy as they all will die.

Retrieved from "https://nanatsu-no-taizai.fandom.com/wiki/Wrath_of_The_Gods_Episode_15?oldid=150051"
Community content is available under CC-BY-SA unless otherwise noted.