The End of The Seven Deadly Sins 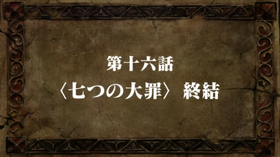 The Seven Deadly Sins are saved from Chandler by Gloxinia and Drole who sacrifice their lives in order to buy them time to escape. However, Chandler tracks them down again and Meliodas finally awakens to reveal he will find a way to break his and Elizabeth's curse, but as he cannot work with his former teammates, Meliodas disbands the Seven Deadly Sins.

The recently transformed Chandler unsheaths a large sword hidden inside his cane and prepares to attack the Sins. King immediately uses Increase and tells the rest he is holding him as much as possible so they can escape, even knowing this could mean his death. He apologizes to Diane and throws her to Elizabeth. However Chandler waves his sword, breaking Chastiefol.

Unexpectedly, the Seven Deadly Sins are saved by Gloxinia and Drole, both of them wanting to redeem for betraying Meliodas and Elizabeth. Gloxinia tells Elizabeth that back then in the Vaizel Fight Festival they did not realize she was their friend but now that are sure they ask her to take care of Meliodas for them. King and Diane offer to fight alongside their mentors as the rest of the Sins escape on Hawk Mama.

Gloxinia and Drole trap Chandler inside the Ore Tree Orudora and prepare to fight the demon but before King and Diane can participate, Gloxinia uses Basquias to send them away to safety in the Boar Hat. Chandler frees himself, now considering them traitors to the Demon Clan, but both Gloxinia and Drole tell him they are no longer Commandments nor the kings of Fairies and Giants respectively. Chandler violently fight them ultimately killing both Gloxinia and Drole. As they die they dedicate their last will to both King and Diane, intrusting them the titles of King of Fairies and Queen of Giants.

Elizabeth wakes up Merlin who fainted when she tried to use her Sacred Treasure Aldan before escaping Chandler. She learns of both Gloxinia and Drole sacrifice and Gowther's current state due to the Absolute Order curse. They all feel bad as a result of Meliodas negative energy filling the air, so Elizabeth takes him out to get some fresh air. Merlin regains her older form appearance and the rest of the Sins discuss which should be their next move.

However, Chandler tracks down Meliodas with his essence alerting the Sins when Escanor turns to his weak form. When they go to see Elizabeth and Meliodas they learn the Sin of Wrath has awakened again, fully recovered.

They confront him but Meliodas tells them he actually has all his memories and reveals them he is planning to take Elizabeth with him. The rest of the Sins do not understand what he means as an angry Hawk nags Meliodas for his attitude. Meliodas then reveals that his father has always watched them in silence through Hawk's eyes. Meliodas then states he cannot not be with them as he will look for a way to break Elizabeth's curse, announcing the disbandment of the Seven Deadly Sins.

Retrieved from "https://nanatsu-no-taizai.fandom.com/wiki/Wrath_of_The_Gods_Episode_16?oldid=150067"
Community content is available under CC-BY-SA unless otherwise noted.