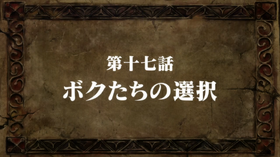 Our Choices「ボクたちの選択 Boku-tachi no Sentaku」 is the seventeenth episode of Season 3 of the The Seven Deadly Sins anime.

In a desperate attempt to save his best friend, Ban offers to go to Purgatory and bring back Meliodas' emotions. Meanwhile, Meliodas returns to the Demon Clan with his own plan for breaking his and Elizabeth's curses: becoming the new Demon King.

After Meliodas leaves with Elizabeth and Chandler, the rest of the Seven Deadly Sins are bittersweet about the experience. Merlin reveals there is not much they can do as Meliodas' emotions are held captive in Purgatory. Hawk then remembers how Meliodas called him "Demon King". Interested in his words, Merlin asks him to look at him and as she examines his eyes she notices something surprising.

In Camelot, Estarossa awakens from his comatose state after having a dream with the Goddess Elizabeth. He is greeted by Peronia, a little demon from the Demon Clan who took care of him.

Back in the Boar Hat, Merlin explains that Hawk is somehow connected to Purgatory and can act as a bridge between their world and that dimension. Diane then suggests they should use Hawk as a portal to enter Purgatory and bring back Meliodas' emotions. However, Merlin explains this is impossible as there are not many people who have gone to Purgatory and come back safely. She only knew one person, her own father who went to Purgatory for just one minute and when he came back he did it as an old and traumatized man. She describes Purgatory as her father did: a savage and hellish dimension, where it was impossible to live or endure and therefore it is inhabited by creaturess and the Demon King himself. Ban offers himself to go as he is the only one who could survive due to his immortality and he wants to bring his best friend back to his old self.

In Camelot, Meliodas returns to his brother Zeldris to declare he will become the new Demon King. Zeldris refuses to accept his offer and their conversation is interrupted by Estarossa who reveals to them he is not interested in the Demon King throne but as his brothers are fighting for it he wants to follow up but he is willing to give up his right in exchange of Elizabeth who he knows even though they both are sure is the first time they meet. Meliodas is not negociating his decision so he overcomes both his brothers and even hold back Cusack, making proud Chandler and scaring Peronia and Elizabeth.

Zeldris is still irked by the situation as he knows Meliodas is planning to remove his and Elizabeth's curse, until Meliodas grabs him and whispers to him something inaudible that leaves him speechless and he finally agrees to help him become the new Demon King. Meliodas explains he can achieve his goal by absorbing all of the ten Commandments from their holders but only if he collects them all.

Zeldris reveals he already has Gowther, Gloxinia and Drole's. Meliodas has Grayroad's that took away from Merlin. Zeldris wonders how they are getting the rest but Estarossa believes if there is a member of the Commandments who refuses, they can just kill them. Eventually both Zeldris and Estarossa then go to collect the rest of the Commandments.

In the Boar Hat, Merlin prepares to send Ban to Purgatory through Hawk's eyes. Ban promises to come back for Elaine and he enters Purgatory shortly after.

Retrieved from "https://nanatsu-no-taizai.fandom.com/wiki/Wrath_of_The_Gods_Episode_17?oldid=150095"
Community content is available under CC-BY-SA unless otherwise noted.