March of the Saints 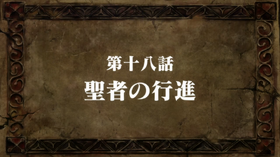 March of the Saints「聖者の行進 Seija no Kōshin」 is the eighteenth episode of Season 3 of the The Seven Deadly Sins anime.

Merlin negotiates with Zeldris the Commandment of Piety so she can bargain in exchange something else. Meanwhile, Princess Margaret's search for Gilthunder comes to an end after she pays a high price in order to save her lover.

Following his brother's orders of collecting the rest of the Commandments, Zeldris tracks down Melascula's Commandment of Faith in the Boar Hat. Merlin who is willing to bargain it for something else, shows him her true self and Zeldris recognizes her as Daughter of Belialuin. As they both fly up to the sky to negotiate quietly, Merlin drops one of her hair to create a strange creature on top of Hawk's nose to let the others hear the negotiation.

A few days earlier in another part of Britannia, Princess Margaret Liones, with the help of both Hendrickson and Dreyfus, begin their quest to rescue Gilthunder from Vivian.

On the way, they save a pair of lovers from an Orange Demon which affects Margaret as she cannot stop thinking about Gilthunder' safety.

That night, while they were camping, Hendrickson reveals to Dreyfus he feels more responsible for Margaret and Gilthunder separation as he was the one who worked with Vivian against them and he only wants for them to be finally together. Margaret is awakened by a mysterious voice in an old druid altar so she follows it and has a conversation with it. She agrees to give the voice what it wants in exchange for an opportunity to save Gilthunder, ignoring Dreyfus warnings who can feel something is off with that mysterious voice. Hendrickson tries to protect her with Purge but is too late and Margaret is now the vessel of a member of the Goddess Clan: Ludociel.

In the present time, during a battle between Holy Knights led by Howzer, they are saved by Solaseed who is now under the control of another Goddess. On a different battlefield, Arbus, hosting also a Goddess, rescue some Holy Knights. Both promise to the Holy Knights to win their battle against the Demon Clan.

In an abandoned Goddess temple, Gilthunder is desperate for finding a way out, when he thinks he found an escape route he discovers he is in a floating temple atop the clouds. Vivian tries to discourage him from escaping as most of Liones' habitats including Margaret are most likely dead. She then blatantly offers to him to have kids together so they can honor Margaret and she goes as far to tell him they should name their potential daughter as Margaret.

Suddenly, a portal opens behind Vivian, who is shortly after pierced through her neck by Ludociel. Margaret is happy to see Gilthunder is fine but before they can hug, Ludociel takes over his vessel again. Dreyfus tries to explain Gilthunder the current situation as Ludociel is able to feel a dark magic from far away.

Up in the clouds, Zeldris recalls the legend behind Merlin's title as the last survivor of Belialuin, a city of wizards that was exterminated by both the Supreme Deity and the Demon King after they were tricked by her. Due to both gods wanted Merlin on their side they offered her blessing and powers that eventually turned out to be a big mistake as they made her immune to their respective magic. Merlin is willing to exchange Melascula for another thing so she tries to get Elizabeth back but Zeldris refuses as Meliodas would not allow it. She then asks for King Arthur instead but Zeldris denies it as he does not know him and could not guarantee it. Merlin then asks all of the people that were affected by his Commandment to be released and to have the chance of leaving without being attacked by the demons. Zeldris agrees and fulfills his part of the deal. When he believes Merlin will try to betray him, Zeldris is struck by an massive explosion thanks to Ludociel's intervention.

Retrieved from "https://nanatsu-no-taizai.fandom.com/wiki/Wrath_of_The_Gods_Episode_18?oldid=151067"
Community content is available under CC-BY-SA unless otherwise noted.