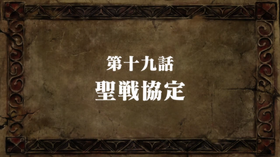 The Holy War Pact「聖戦協定 Seisen Kyōtei」 is the nineteenth episode of Season 3 of the The Seven Deadly Sins anime.

Thanks to Ludociel's intervention, the rest of the Seven Deadly Sins evacuate most of Camelot citizens and rescue Elizabeth who join them to find a way of stopping Meliodas of becoming the new Demon King, even if that means to die again. Once they reunite with the recently awaken Stigma archangels including their leader Ludociel in Margaret's body, Elizabeth, in representation of the Seven Deadly Sins, form a pact in order to protect Meliodas and the rest of their loved ones.

Shortly after witnessing Ludociel's attacking Zeldris, Merlin teleports to the Boar Hat safety. King asks her what happened, to Merlin replies one of the Four Archangels attacked Zeldris during their negociation and she tells them if they are going to do something is the perfect time.

Back in the Sky Palace, Ludociel gladly states Margaret's body is his perfect vessel as he is praised by Hendrickson who believes with Ludociel's help they might stand against the demons. Dreyfus nags him out by telling him he should react properly because Margaret and Gilthunder are in a compromised situation. A confused Gilthunder asks Ludociel why he chose Magaret, to what he replies she herself offered her body. Desperate, Gilthunder tries to call out Margare, but result pointless.

Suddenly Zeldris recover and uses Dies Irae, engulfing the Sky Palace with a massive power blast seemingly defeating Ludociel and the others.

Meanwhile in Camelot, Chandler realizes Elizabeth is escaping from Meliodas' watch, so he takes the chance and creates a pair of minions made out of his own flesh to go after her.

In other part of Camelot, the Seven Deadly Sins help evacuate the kingdom with help of Merlin teleporting magic and King's Chastiefol's Sunflower form. Diane mockingly scares some villagers threatening with eating them, until Elizabeth sees her. At that moment, Elizabeth is attacked by one of Chandler's minions who slashes the princess' forehead. Diane smashes the minion and take Elizabeth to hop in Hawk Mama and teleport away. Chandler laments not killing Elizabeth, but he is relieved that at least they are separated now.

In their way to Liones, Elizabeth is grateful to see everyone again and consoles Diane who still is bittersweet about Elizabeth's unavoidable demise once the curse is complete. She tells them she will reborn anyway as he begs them to lend her their strenght in order to stop Meliodas of becoming next Demon King.

In Liones, King Bartra is informed of the return of Camelot's citizens and about the Seven Deadly Sins victory, so he meet with them at the castle entrance. There he notes Elizabeth's eyes are the same of the Goddess Clan but she tells him she will explain later. Another knight informs Gilthunder was successfully saved by Margaret however when she enters along Arbus and Solaseed, Elizabeth warn her father her sister body is being manipulated by another entity. King Bartra demands to know their identity, to which Ludociel introduces himself and Tarmiel and Sariel do the same as well. Ludociel notes Meliodas is absent and concludes he is acting according to his nature, enfuriating Elizabeth who claims the situation is not what it seems. She reluctantly accepts in her current situation there is no much they can do, so she makes a pact with Stigma so they can finish the Holy War once for all.

That night Gilthunder and Howzer train together as the first admits he does not want to ally with the Goddess Clan after what happened with Margaret. Howzer confesses he feels the same but he will support him and Margaret no matter what.

Meanwhile, Dreyfus gets drunk as he regrets the current alliance of Liones with the Goddess clan as a result of sharing Fraudrin's memories he is afraid of the Goddess Clan before passing out. Griamore then covert him with a blanket.

At Liones, there is a party. Hendrickson joins Stigma's banket and asks about the fouth archangel whereabouts but instead of getting an answer, the three Archangels gaze at him menacingly. They are interrupted by Deathpierce and the rest of the Pleiades of the Azure Sky who refuses to trust the Goddess Clan as a goddess was responsable of Denzel Liones' demise. Ludociel says they also regret Nerobasta death as well and uses Breath of Bless on them as a regard for their bravery as all of them feel empowered. Once he finishes, Ludociel answer Hendrickson's question about Mael by telling that he was killed by Estarossa of the Ten Commanments.

In the castle yard, Elizabeth and Bartra recalls the day she climbed the tree and how she discover her right eye's symbol. Once Bartra realizes Elizabeth current curse he grief, while Elizabeth hugs him and request to have the honor of being his daughter for two more days.

Retrieved from "https://nanatsu-no-taizai.fandom.com/wiki/Wrath_of_The_Gods_Episode_19?oldid=150557"
Community content is available under CC-BY-SA unless otherwise noted.