Memories of the Holy War 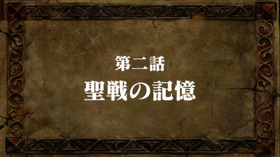 Memories of the Holy War「聖戦の記憶 Seisen no Kioku」 is the second episode of Season 3 of the The Seven Deadly Sins anime.

After meeting again, both King and Diane try to keep up to each other until they are captured by Drole and Gloxinia from the Ten Commandments. However, they reveal their intention is not to harm them but to train them as their successors, so they send King and Diane's consciousness 3,000 years ago to a Britannia where the Holy War is ongoing.

As they saw each other naked, King apologizes to Diane, but she tells him it was her fault too. King was worried that his wings were not sprouting yet, but as he feels Diane may understand him, he stand up to say he was talking about his wings, but then Diane again see him naked.

Diane wonders what everyone is doing in Liones and King tells her that he heard that after Meliodas' death, the Demon Clan was tearing up Britannia. They get sad about remembering that Meliodas had died, saying that he did not deserve to. Diane then wonders why the Fairy King's Forest was not attacked and King tells her that is due to a barrier that decides who enter and who does not, although Gloxinia and Drole may have possible enter and that they do not know what happened to them after Meliodas' death.

Diane goes to see Matrona, telling her that she may take a bath. Matrona agreed, but tells Diane to be careful where she steps as one of her children is playing with Oslo. Gerheade tells King that she felt a strange gaze upon them, but can not explain it. As more fairies come, everyone started dancing out of the blue. Gerheade wonders if Gloxinia was still alive and helping the Demon Clan, it must be because of the events from 3,000 years ago, but soon after that, she joins the dancing too. As she danced she feels she is dancing with Gloxinia and then everyone stop dancing with Matrona wondering what where doing and realizes that King and Diane are gone.

At the Ore Tree Orudora, King and Diane wake up wondering where they are and then realized Gloxinia and Drole are standing in front of them. King and Diane quickly prepare to fight, but King get easily overpowered by Gloxinia, while Diane's attacks do not have any effect on Drole, who just dances around her attacks and easily knocks her down. Gloxinia commented that it is quite unprecedented that at this point the Fairy King still do not have wings. King tells Gloxinia to just finish them and Gloxinia agreed they will do unless they can fulfill their expectations and surpass them. Gloxinia then uses his spear to heal both Diane and King. King can not understand what is going on, but Drole explains they will train them and while they are from the Ten Commandments, they are not from the Demon Clan and in fact they used to fight against the Demon Clan as the Giant King and Fairy King, but during the fight they were forced to make a choice and that led to their current situation. They believe they made the right decision, until they met Meliodas. Gloxinia then tells them, they want King and Diane to prove to them if the choice was correct or not and that this trial will help them grow greatly, but if they made a mistake, they could die. King and Diane then immediately agreed to do it and Gloxinia then casts a spell on them.

King and Diane then woke up at different place and soon discover they are in Gloxinia and Drole's bodies respectively. As they are confused about what happened, they feel a sinister magic approaching. They get a surprise when the person who came is Meliodas, who they thought dead. They tried to explain to him they were King and Diane, but Meliodas do not know who those two are, saying that Gloxinia and Drole look the same as usual. Another person arrives talking to them with familiarity. King and Diane are surprised to see none other than Elizabeth there, and more at the fact she has two pair of wings. Meliodas explains it was her normal look as she is a Goddess.

Meliodas then asks King and Diane to come with him to the Valley of Fossils. As King and Diane follow Meliodas and Elizabeth, King tells Diane that this is probably the Britannia from 3,000 years ago and before Gloxinia and Drole joined the Ten Commandments, so they should keep pretending to be them at the moment. When they reached the location, they see a scene of carnage; the Demon Clan massacring humans. Meliodas quickly starts killing the demons, while Diane and King just watch shocked on what they are seeing. A large demon then appears behind Diane and King, introducing himself as Calmadios, the Piety of the Ten Commandments.

Retrieved from "https://nanatsu-no-taizai.fandom.com/wiki/Wrath_of_The_Gods_Episode_2?oldid=149015"
Community content is available under CC-BY-SA unless otherwise noted.