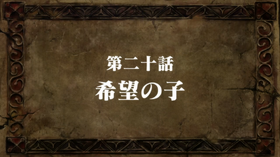 Child of Hope「希望の子 Kibō no Ko」 is the twentieth episode of Season 3 of the The Seven Deadly Sins anime.

As the Seven Deadly Sins get ready for their upcoming war, Ludociel confronts Escanor about his magic power Sunshine revealing its origin. Meanwhile Arthur Pendragon gets Excalibur again to fight Meliodas and his allies by himself.

Arthur is trying to get near Camelot castle. However, everytime he seems to be close he returns to the same point, which makes him suspect he is in an illusion. His theories are correct as Peronia is keeping him away with her magic spell Märchen Maze.

Next day at Liones, Merlin while fixing Gowther's body, she comments his body is so good there is not much she can add. Gowther then asks her for certain improvement that let Merlin worried and surprised.

Meanwhile at the city, Hawk is taking a walk with Escanor as they talk about Meliodas and Elizabeth, Escanor wants to know what he thinks about Merlin's opinion on him. But Hawk tells him he should ask her himself.

In the castle, the Four Archangels are still in the party with most of the Holy Knights drunk. Ludociel laments after years humans still use alcohol. Once he heals himself, he feels a familiar presence. He discovers it belongs to Escanor so he confronts him asking who he is. Escanor introduces himself as Lion's Sin of Pride from Seven Deadly Sins and he tells him they already met last night. Ludociel don't believe his words so he asks him from who he stole the power he calls a "curse". Ludociel reveals that Escanor's power comes form a Grace, powers created by the Supreme Deity, that is akin to a Commandment. After explaining the his partners' Graces and his own he reveals the fourth was called Sunshine taht was once possessed by Ludociel young brother, Mael.

Due to Graces being divine powers not designed to be held by humans, Ludociel warns Escanor his body might be destroyed the more he uses Sunshine. But Escanor tells him he does not care as his power has been with him since he was born so he assures him he will fight until his last days. Ludociel admits he likes him so they both make amends.

In another part of Britannia, Estarossa finds a still petrified Galand who tells him Zeldris can undone his Commandment effect. However, Estarossa is not interested so he kills him to get his Commandment of Truth. Zeldris returns at the castle to inform the rest he failed at getting Melascula's Commandment and about the comeback of the Four Archangels.

Back in Camelot, Arthur notes Cath is not with him anymore. As he looks for him, unbeknownst to him, Cath finds Peronia and kills her by eating her alive. When Arthur finally enter the castle, he is quickly detected by Zeldris and Cusack. Cath uses a type of telekinesis to distract the demons and buy Arthur time to get Excalibur. Once there Arthur learns Cath was defeated and Meliodas shows up to tell Arthur he should leave and he is not the same he knew in the past. Feeling betrayed Arthur takes out Excalibur and devotes himself to defeat him and the demons. Arthur starts fighting off both Cusack and Chandler, who they hurt easily and even puts Zeldris on the ropes using many fighting styles of human heroes.

At Liones, the rest of Seven Deadly Sins are discussing Stigma's plan to recover Camelot. Merlin wants to be there so she can protect Arthur, Hawk asks her why she is so interested in him. Merlin replies Arthur one day will lead Britannia as the chosen child for Excalibur, a holy sword so old that has been used for centuries for many heroes. With each time the souls of heroes were impregnated to the sword that has been choosing its next bearer and therefore Arthur is the chosen king among kings.

Retrieved from "https://nanatsu-no-taizai.fandom.com/wiki/Wrath_of_The_Gods_Episode_20?oldid=150192"
Community content is available under CC-BY-SA unless otherwise noted.