Beginning of the Holy War 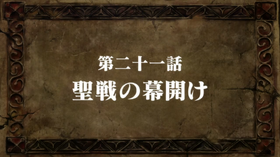 Beginning of the Holy War「聖戦の幕開け Seisen no Makuake」 is the twenty-first episode of Season 3 of the The Seven Deadly Sins anime.

Even though Merlin attempts to save Arthur he is defeated and mortally wounded by Cusack. On the other hand, Ludociel leads the Holy Knights to resume the Holy War in order to finish it once for all.

Arthur learns horrified, that both Chandler and Cusack survived his attack. They explain they were interested in which abilities he could use with the sword and Cusack is angered when he notes his mustache was ruined by Arthur slashing attack. Still motivated, Arthur keeps his fight but Cath can tell he would not survive so he calls out Merlin, who can sense what is happening.

As Arthur tries to attack the demons he suddenly feels exhausted and Excalibur is heavier than it was before. Cusack then explains to him he is indeed powerful with the sword but as he does not know how to properly bear it and therefore his body is suffering the consequences. He also reveals to him most of the demons defeated by the human heroes were low demons and he proves this by noting most of the heroes inside Excalibur are trembling in fear. Cusack then tries to use Resonant on him until Merlin appears and defends Arthur by encasing Cusack with an ice spell. Meliodas demands the Commandment of Faith but she tells him Elizabeth is working hard to stop him from becoming the next Demon King and he should take that in consideration.

Once Merlin, Arthur and Cath arrive at Boar Hat safely, the first asks Elizabeth to heal him. But all the way from Camelot, Cusack completes his Resonant spell and forces Arthur to grab Excalibur and stab himself in the heart. As a result Arthur dies and he regrets he did not fulfil Merlin's expectations. A few moments later Merlin reveals when she first met him she felt his immeasurable potential and she thought he was destined to rule Britannia. Elizabeth realizes Arthur was very important to him, similar to how important Meliodas is for her as Escanor secretly hears the conversation. After remembering the time together Merlin feels nostalgic thanks to Elizabeth healing magic and is moved to tears for the first time in 430 years.

Next day, the Seven Deadly Sins meet with Stigma in order of planning their war strategy: a Defensive Force will stay in Liones, while a Search-and-Destroy Force will battle the Demon Army on the way to the Camelot front; finally, a Assault Force will invade Meliodas' lair in order to stop him becoming the Demon King. Ludociel is curious of why Elizabeth is not joining the Assault Force and accuses her of evading Meliodas for what he has become. But Sariel and Tarmiel ask Ludociel to stop as they need Elizabeth's support in the front battle. Ludociel then requests Hendrickson as his personal bodyguard and Gilthunder offers to come as well in order to protect Margaret's body.

Meanwhile, in Camelot Meliodas is ready to absorb five of the ten Commandments and he assures his young brother once he achieves his goal, he will keep his promise to him. Zeldris says he trusts him so he witnesses his brother begins to absorb the Commandments.

Back in Liones, the rest of the Seven Deadly Sins get ready for the battle. King tries to proposes to Diane but is interrupted by Escanor who disapproves of their behaviour. Gowther joins them now that he has been fixed. As the Holy Knights go to the battlefield both Sariel and Tarmiel note they are under the effects of Breath of Bless but they understand they need as much pawns as they need. After Ludociel makes an speech the Holy Knights begin their attack to the Demon Army.

Retrieved from "https://nanatsu-no-taizai.fandom.com/wiki/Wrath_of_The_Gods_Episode_21?oldid=150194"
Community content is available under CC-BY-SA unless otherwise noted.