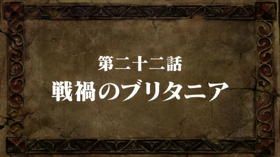 War-torn Britannia「戦禍のブリタニア Senka no Buritania」 is the twenty-second episode of Season 3 of the The Seven Deadly Sins anime.

The Holy War rages on. King and Diane, with support from Elizabeth and the Four Archangels, help out the Holy Knights in the battlefield. Meanwhile Estarossa's tracks both Derieri and Monspeet in order of taking their Commandments that leads to a battle where Monspeet sacrifices himself to protect Derieri.

Howzer leads the Holy Knights against the Demon Army. During the battle, Deathpierce decapitates a Copper Demon and faces by himself an Orange Demon which punches him violently. However he does not feel pain at all and keeps fighting. Gowther can tell he and others knights are under the effects of Breath of Bless spell.

Meanwhile at a nearby village, Annie visits Monspeet and Derieri to bring them food and after a short talk she notices many of the villagers are leaving to escape the ongoing war repercussions. After helping a little kid to reunite with his family she goes back to warn her friends but she is found by Estarossa who already knows his comrades are hiding there.

Back in the battlefield, King and Diane defend the Holy Knights with their magic power and most of the demon mob is eventually destroyed thanks to Sariel and Tarmiel with their Ark attacks. Once the mob seems to be away, Howzer orders to take care of the injured. But most of them are intact, as Deathpierce praises Ludociel, convinced he was blessed thanks to the Goddess magic. Elizabeth reveals that Breath of Bless is actually a brainwashing spell that makes believe those who are affected to be overjoyed forgetting about their own safety and fighting for the Goddess Clan until they die. Deathpierce cannot believe her, but both Sariel and Tarmiel support Elizabeth and reveal that during the battle the Princess of Liones drove away the demon mob and protected everyone by healing their wounds. Elizabeth then says she wants everyone to remember they have someone waiting for their return. Hawk and Gowther talk about how much Elizabeh has grown and the latter comments that even the Archangel Mael praised Elizabeth in the past.

Inside Annie's shack, both Derieri and Monspeet are talking about their next move now the Holy War is reaching them again. Derieri reveals she will be handing over her Commandment and Monspeet cannot stop thinking how much they changed from the Holy War 3,000 years ago, especially Derieri after her sister's death. She reveals that her sister loved Monspeet and she always will. Monspeet then tries to confess something but they are interrupted by Annie. She is there to warn them about the upcoming demons but she is immediately killed by Estarossa.

Estarossa reveals to them he is collecting the Commandments and tries to feed from Annie's soul but Monspeet saves her using his power Trick Star, which allows him to swap two objects' places with each other. Estarossa wants to take their Commandments even if he has to kill them and put Monspeet into a head lock. However he switches places with him and mocks him for being a demon who barely can stand one Commandment and for his lack of strength. Infuriated, Estarossa tries to use Hellblaze on him, but Derieri explains he is the most skillful using the same spell so it is useless against him.

When Estarossa seems to be unconscious he suddenly grabs Derieri and prepares to destroy her last heart. Monspeet switches places with her and loses his last heart instead. Monspeet uses his last will to send Derieri flying away and immolates himself. Confused Derieri yell at him wondering what he wanted to confess her.

Retrieved from "https://nanatsu-no-taizai.fandom.com/wiki/Wrath_of_The_Gods_Episode_22?oldid=150437"
Community content is available under CC-BY-SA unless otherwise noted.