The One Twisted by Darkness 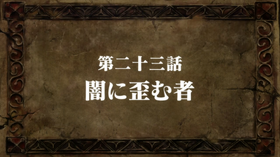 The One Twisted by Darkness「闇に歪む者 Yami ni Yugamu Mono」 is the twenty-third episode of Season 3 of the The Seven Deadly Sins anime.

Following Derieri, Estarossa ends up at the battlefield, where he tries to take Elizabeth for himself. However he first has to face both Sariel and Tarmiel who are looking to avenge their fallen fellow of the Four Archangels.

Shortly after narrowly escaping Estarossa thanks to Monspeet's sacrifice, Derieri lands where the Search-and-Destroy Force was fighting, shocking everyone.

Meanwhile, within Liones Dreyfus defeats some demons during the battle; a Holy Knight informs him the front where Griamore was fighting was destroyed. He goes there desperate to protect his son from a Silver Demo who just stabbed him in the stomach with his tentacles. When Dreyfus reaches out for him he notes he is somehow giant and realizes that is Full Size, the same power of Fraudrin of the Ten Commandments, and therefore he can protect his child.

Back in the battlefield, Derieri admits in front of Elizabeth she is there as she does not know where else to run away. Deathpierce is delighted for her presence and tries to avenge Denzel Liones' death by attacking her but it is pointless as his sword breaks when he tries to decapitate her.

Derieri tries to explain her situation but they are interrupted by Estarossa who is glad to see Elizabeth is not anymore on Meliodas protection. He cast a Hellblaze spell, Evil Hound, to lock them up. He then tells Elizabeth he still is looking for her, Elizabeth realizes he is also collecting the Commandments so she attacks him with Ark and sends him flying away.

Estarossa is then confronted by Sariel and Tarmiel who wonder how he was able to survive Elizabeth's Ark and proceed to fight him. The Commandment of Love overpower them with a slashing attack and apparently defeat them, but they recover and tell him they are about to show them their Graces. Estarossa is aware even though they hate him, they will not fall for his Commandment of Love as they are protected thanks to their Graces.

Elizabeth frees herself from the Evil Hound with an Ark spell, surprising Derieri who again confirmed she is the same Elizabeth from 3,000 years ago. Elizabeth calls out the rest of the Holy Knights and Diane reveals she protected everyone with her earth magic.

Estarossa keeps fighting both Archangels who apparently defeat him when they combine their Graces in a single attack; locking him inside a dimension made out of Sariel's Tornado and Tarmiel's Ocean.

However when they announce Estarossa's defeat, he appears behind them with a new appearance and a playful attitude. When Tarmiel mortally wounds Estarossa he admits his strength still is not enough. He then absorbs the Commandment of Monspeet, gaining a powerful dark magic and has a change of appearance similar to Meliodas as he states that he himself is Meliodas.

Retrieved from "https://nanatsu-no-taizai.fandom.com/wiki/Wrath_of_The_Gods_Episode_23?oldid=150238"
Community content is available under CC-BY-SA unless otherwise noted.