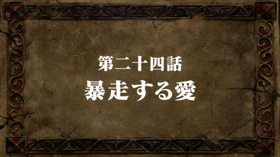 Rampaging Love「暴走する愛 Bōsō suru Ai」 is the twenty-fourth and last episode of Season 3 of the The Seven Deadly Sins anime.

A twisted and unstable Estarossa tries to capture Elizabeth, after recalling his love for her. But being unable to fully control the power of the absorbed Commandments, Estarossa goes berserk putting everyone in danger. In order to save her loved ones, Elizabeth agrees to go with him. The Holy Knights prepare for the next battle, while King lead a rescue team to go after Elizabeth. Meanwhile, at Purgatory, Meliodas' emotions awaken ready to come back somehow to the other side.

In Britannia many years ago, Estarossa recalls how he fell for Elizabeth as she was one of his few peers who did not mock him for his lack of strength. As Estarossa grew up admiring his elder brother Meliodas, he eventually became deliosinated as a result of his romance with Elizabeth. Back in the present Estarossa claims he always wanted to be like his brother and now he is Meliodas.

In Camelot, Zeldris, Cusack and Chandler are staring at Meliodas' cocoon. Cusack asks how is Meliodas taking the commandments as Zeldris replies he could not expect less of his father's first option of heir of the Demon Clan.

Meanwhile at Liones a menacing Estarossa tries to approach Elizabeth after defeating Tarmiel and Sariel. Guila guards Elizabeth and uses her explosion magic as the rest of Holy Knights follows Howzer's orders of defending Liones' princess. Most of their efforts are futile as Estarossa easily resists all the attacks, he injures Guila and defeats once more both Goddesses the moment they try to attack him. Estarossa invites Elizabeth to go "their secret place", to Elizabeth's shock who wonders how he knows about it since it was supposed to be a secret and she confirmed she knows him somehow much better than she thought but cannot remember how.

Suddenly Estarossa loses control of his commandments and gets furious as he remembers how Meliodas told him he would never allow him to date Elizabeth. She refuses to believe what she hears and tells him his memories are wrong, Estarossa insists, yells and suffers a transformation of dark matter. Elizabeth notes this is happening due he is holding more commandments he can handle and begs him to expel them.

Estarossa out control attacks everyone around including Diane and King and he chokes Elizabeth jealous of Meliodas. She cannot be killed without seeing Meliodas again so she uses Ark to escape Estarossa. But she knows the only way of protecting his beloved ones is to surrender so she agrees to go with Estarossa as long he promises not to hurt anyone else, he accepts and they go after Elizabeth heals everyone's injuries.

As Holy Knights gather around after their recent victory over the demons, they discuss their strategy to save Elizabeth. King offers himself to go after her since he is the only one who can fly and recalls both Tarmiel and Sariel were defeated. Sariel corrects him by showing next to them and much to Diane and Howzer surprise his vessel body's now looks like a young and beautiful lady. Sariel explains this is a result of a human vessel holding a high ranking Goddess and that the same could happen to Margaret's body as she holds their leader Ludociel. A confused Howzer aks Tarmiel about his vessel, who clarifies that because his vessel died before he could take over his body and this is the main reason why a Goddess magic power cannot age a vessel; Sariel then say he got his vessel body when Solaseed got ill from a rare disease and he promised to cure her in exchange of her body.

Sariel apologizes to Solaseed for lying to her and proceeds to expel himself from her body and Tarmiel does the same as well. Eventually both goddesses get their original bodies back in order to save Elizabeth and defeat Estarossa once for all. Derieri offers to join them in their rescue team but she is rejected as Sariel says no one trusts her. King supports her telling them everyone back in the holy war Elizabeth first live saved her and Monspeet to Derieri's surprise who asks him how he knows about it but King replies it does not matter.

As King, Tarmiel and Sariel leave Gowther tells Hawk if he can ask him a special favor. In Camelot Merlin uses her magic to bring the assault team consisting of her, Escanor, Gilthunder, Hendrickson and Ludociel inside Margaret Liones. Merlin cannot access Meliodas's cocoon of darkness, Ludociel uses his Sanctuary protection spell so they can be inside but he warns everyone there is no turn back and once inside they must kill Meliodas in order to escape, Merlin then reminds him there is another way and that is to persuade Meliodas of not becoming the Demon King.

Meanwhile in Purgatory, Ban can be seen walking and wondering where Meliodas' emotions are. King, Tarmiel, Sariel and Derieri continue their quest for Elizabeth but the latter notes someone is following them who turn out to be Gowther with Hawk help. Estarossa takes Elizabeth to ruins of a floating island, Elizabeth thinks how she wants to see Meliodas once again as the latter is seen inside his cocoon preparing for his demon king coronation.

Somewhere else, Meliodas' emotions awake in Purgatory, he walks around telling himself that he will find a way to come back to Elizabeth and his friends.

Retrieved from "https://nanatsu-no-taizai.fandom.com/wiki/Wrath_of_The_Gods_Episode_24?oldid=150189"
Community content is available under CC-BY-SA unless otherwise noted.