The Ten Commandments vs. The Archangels 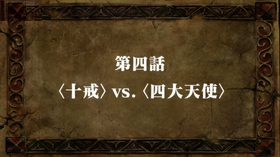 The Ten Commandments vs. The Archangels「〈十戒〉 ｖｓ．〈四大天使〉 "Jikkai" vs. "Yon Daitenshi"」 is the fourth episode of Season 3 of the The Seven Deadly Sins anime.

The battle between the Ten Commandments and Stigma rages on. Tarmiel and Sariel, two of the Archangels, engages in a vicious battle agaisnt the Commandments, that seems to be equally balanced. In a desperate move, both Derieri and Monspeet make a sacrifice to gain more power, putting the Archangels in a compromised situation. Ludociel enters the fight, but amidst the fight, Elizabeth vows to defeat them by herself.

The two archangels Tarmiel and Sariel heal Elizabeth, saying how could they treat her with such barbarism and that they would be yelled for. Tarmiel says he won the bet about whether the Ten Commandments will fall for the trap, but Sariel told him it was not counting as the bet was for all of the Ten Commandments to fall for it. Tarmiel then propose to make a new bet of how long the Demon Clan will last. Sariel agrees, giving them five minutes, but Tarmiel said ten seconds. Galand, understanding the situation, calls for a retreat as Tarmiel and Sariel casts multiple Omega Arks. As the demons get eradicated, Monspeet apologizes to them, saying they will be avenged. Tarmiel says he won, but Sariel pointed out a few survivors. Monspeet then appears behind the Archangels, commenting they were more survivors and hit Sariel with a Gokuencho. Derieri attacks Tarmiel, who deems her punch weak, but she proceeds with punch after punch unleashing her combo on him. Monspeet did not expect the Four Archangels would sacrifice the other battlefields to come after the Ten Commandments, but that gives them a chance to get rid of them. Sariel stand up unharmed, surprised that the Ten Commandments managed to escape the Omega Ark. Derieri finishes her combo on Tarmiel, but he regenerated in justs seconds. Galand then split Tarmiel in two, but he regenerates again. Sariel then attacks Monspeet, then Fraudrin attacks Sariel, but receives multiple wounds on his hand.

Ludociel, disappointed that only weaklings were defeated, feels he has to deal with the demons himself. He orders Nerobasta to defend the gate to the Celestial Realm at all cost, because if it is get destroyed they will not be able to receive reinforcements. Nerobasta accepts, ready to put her life. Ludociel then returns and told Nerobasta to call for reinforcements and have them stand by if they end up needing them. But this "Ludociel" is actually Gowther, who manipulating Nerobasta's mind, asks her to bring him to the gate. When they reached the gate, Melascula appears, Gowther asks her about rescuing the prisoners, but Melascula says it was a trap. Gowther then peeks into her mind and understand about the Four Archangels appearance and the loss of their troops. He informs her of Ludociel heading towards the battlefield, which will make the odds there not in their favor.

At the battlefield, Fraudrin attacks Sariel again, but receives even more wounds all over his body. Galand and Derieri keep fighting Tarmiel, but are losing and as Galand is in a bad spot, Monspeet attacks Tarmiel, but then is cut in half by Sariel. Derieri tries to punch Sariel, losing parts of her arm, but managing to break his defense and punch him. As Sariel fall to the ground, Galand stand up behind him, holding Tarmiel's Ark smashing it over Sariel. Ludociel then comes and attacks Galand from behind and knocks him out.

Ludociel blocks Monspeet's attack and dodges Derieri's kick, then launchs his attack hitting them both. Having no other option, Monspeet and Derieri pierces their chest. Monspeet and Derieri then took out six of their hearts swearing to offer them in order to release the true nature residing in their souls. They then start transforming into Indura beasts. Ludociel though their efforts are futile, but then is punched by Derieri and send flying. Galand tells Fraudrin they must leave now, but seeing Monspeet and Derieri, Fraudrin found them looking like Indura beasts. Galand explains if a powerful demon offers six of their seven hearts to the darkness, they can become Indura, but only those with power level above 50,000 can survive the transformation. Ludociel launchs an attack, but as it did not had any effect on Monspeet and Derieri, he calls Sariel and Tarmiel for assistance. A moment later, Monspeet catch both Sariel and Tarmiel with his long hands and pinned them to the ground and then burned them.

Meliodas, with King and Diane, manages to find Elizabeth, who was being protected by a Goddesses Clan barrier. Meliodas put his sword on the ground and reaches inside the barrier, even if this means getting burned by the barrier, and reach Elizabeth. Elizabeth then wakes up and starts crying that she can not do anything. Meliodas tells her it was not her fault, but before finishing his words, Elizabeth stops him, saying he is always the one getting hurt.

Ludociel was still fighting with Monspeet and Derieri. Elizabeth then appeared in front of him telling him to stand back as she will stop them.

Retrieved from "https://nanatsu-no-taizai.fandom.com/wiki/Wrath_of_The_Gods_Episode_4?oldid=149287"
Community content is available under CC-BY-SA unless otherwise noted.