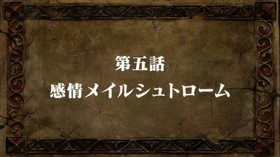 Emotional Maelstrom「感情メイルシュトローム Kanjō Meirushutorōmu」 is the fifth episode of Season 3 of the The Seven Deadly Sins anime.

With the help of Meliodas, Tarmiel and Sariel, Elizabeth is able to save Monspeet and Derieri of their demise and Ludociel's intentions. At Stigma's base, Rou and his human companions massacres its members without discrimination. As King and Diane tries to reach the base on time, they are intercepted by Gowther.

Diane wonders what those beasts are and Meliodas explains that the Ten Commandments can sacrifice six of their hearts to turn into Indura, beasts that keeps sowing destruction until they die, and that they need to wait until they burn all of their life force and die.

Ludociel wants to join Elizabeth in slaying the beasts, but she refuses and unleash a light attack on Monspeet and Derieri. As the light keeps hitting them, they transform into even more hideous beasts as the darkness in them is trying to resist the light. Ludociel attempts to kill the demons, but Meliodas came and face him, assuring Elizabeth he will be stopping Ludociel. Sariel and Tarmiel wonders what worth is there saving the Demon Clan, but Elizabeth says that the morning light and the veil of darkness equally on everyone and that she will do right regardless of what other thinks.

Ludociel orders Tamiel and Sariel to help him and kill the Ten Commandments along with Meliodas. Tamiel and Sariel decides to do so, but as they got next to Ludociel, they start supporting Elizabeth and saying they are doing what they think is right for them. With the combine powers, they push the darkness out of Monspeet and Derieri, turning them back to their normal forms. As Monspeet and Derieri are unconscious, Elizabeth faints too, but Meliodas quickly manages to catch her. Using the chance, Ludociel lunges towards Monspeet and Derieri to finish them off, but Diane and King intervene and prevents him from doing so. He wonders why they hinders him, but Diane calls him cowards for attacking unconscious enemies. King agrees that anything is allowed in a war, but they need to show respect for Elizabeth who risked her life to save them. King says to Meliodas even if he spares them, they one day will come for his life, but Meliodas says he will deal with that when the time comes.

Ludociel contacts Nerobasta, who at first was not responding as she was under Gowther spell, but hearing Ludociel call, she regains consciousness. Ludociel tells her to summon Mael, but as she turns, she sees Melascula chanting a spell and Gowther next to her, as they were reforming the gate and turning into a gate to the Demon Realm.

Gerheade and Rou are talking when Nerobasta contacts all nearby Stigma members and explains that the Light of Grace has been breached by two of the Ten Commandments. She tells the members to charge, as the two Commandments are not combat types and that they can overpower them with numbers. Rou then stands up, saying that their time had come and kills a giant and a fairy. In the mean time, his men had also killed others. Rou tells everyone that they will not let anyone enter the Light of Grace, until the gate to the Demon Realm is open. Rou and his men then proceeds to kill anyone they can.

King and Diane feel that something is happening. They leave Meliodas, telling him to protect Elizabeth and the two demons and head back towards the Light of Grace. As they were going back, King wonders if what he said was wrong, but Diane assures him that he was not and that no one is born evil and even she would be furious if she sees her comrades being killed in front of her. Gowther then shows up and surprised King, seeing him King and Diane wonders why he was there, while Gowther introduces himself. King realizes this was a different Gowther than the one they knew. Gowther finds it interesting that they knew of him who was not him. Melascula then contacts him saying she was closing the portal she opened for Gowther and will be concentrating on finishing the gate. King asks Gowther why he was with the Ten Commandments, which surprises Gowther as they knew of him, but did not knew he was one of the commandments. As they feel people's magic disappearing, they decide to keep going towards the Light of Grace, but King then feels Gowther's attack and pushes Diane out of it. Gowther tells them he can not let them reach the tower until the gate is complete. King then explains Gowther's magic can influence the mind and that he erased Diane's memory. Hearing that Diane asks Gowther to return her memory, but King explains it was Gowther from 3,000 years in the future that erased her memory. As Gowther could not understand what they are talking about, Diane reveals they are not the real giant and fairy kings and that they came from 3,000 in the future. Gowthers gets interested and wants to hear their story in person, which makes Diane and King wonder what he means.

Melascula was finishing the gate, but seeing it she realize it was not the Demon Realm gate, but Demon Realm's Prison gate. She starts calling Gowther for tricking her. The real Gowther then shows from the gate, explaining he change the battle plans a little as he is seeking his own freedom. He then prevents Melascula from talking, so that the Demon King may not notice something. As he fully goes through the gate, Gowther comments that he was outside for the first time in five centuries. He introduces himself to Melascula as she never met his real body. Gowther then feels all the emotions around him, and saying they are proof are the proof and meaning of life. Melascula tells him he will not be forgiven, that he was defying the Demon King as they were in the middle of a Holy War. But Gowther tells he he does not care about the Holy War. He explains that after the Demon King bestowed him with the Commandment of Selflessness, he lost his freedom and his only contact to the outside world was a puppet "Gowther" he created. But as he can not stand this any longer, she shall bid this world farewell.

Retrieved from "https://nanatsu-no-taizai.fandom.com/wiki/Wrath_of_The_Gods_Episode_5?oldid=149023"
Community content is available under CC-BY-SA unless otherwise noted.