We Call That Love 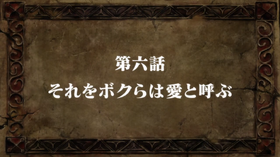 We Call That Love「それをボクらは愛と呼ぶ Sore wo Bokura wa Ai to Yobu」 is the sixth episode of Season 3 of the The Seven Deadly Sins anime.

King and Diane meets Gowther of the Selflessness and his puppet. He explains them how he created it to be his proxy in the outside world. But now being free he has the opportunity to end the Holy War once for all, entrusting to both of them to take care of his "son" in the future. Meanwhile at Stigma's headquarters, Rou reveals to an injured Gerheade his reasons to hate Stigma and regrets what happened to her, until King arrives and finally find out what his trial was about. On the other hand, Diane encounters Zeldris.

Gowther wanted to bid farewell to the world, but first decided to speak with King and Diane and teleported to them. He introduces himself and explains that the puppet was his eyes and legs in the outside world, so he was another him. King asks him what was happening at the Light of Grace and Gowther reveals that the humans had started a rebellion, as they hold grudge against Stigma. He says that the humans put an act to gain Stigma trust and infiltrate the base and that they used the demons for their own goals. King did not believe that and thought that Gowther used all so he can get himself free. He asked Gowther how many other he plans on sacrificing, but Gowther told him his goal is to regain his freedom and end the war. King did not want to listen anymore and asks Diane they leave, but Diane decides to stay and tells King to go and she will catch up later. She asks King to believe in her and he does and leaves towards the tower. Gowther asks Diane if King and she are lovers as they had relationship of trust build over a long time. Diane tries to deny, but wonders. Gowther tells her there was no better proof than she not being afflicted by his Commandment. Diane asks Gowther if he truly plans on ending the war and he confirms if his assumptions are correct. He asks Diane if the war is still continuing in the future and she says it ended 3,000 years ago. Hearing that, Gowther comments that this gave peace to his mind that his death will not be in vain. Diane then wonders what he plans on doing and what will happen of the puppet Gowther. The real Gowther then uses Auto-Awake and tells Gowther that from now on he will live by himself and by his own will. Gowther tells the puppet that there were many things he would liked to teach him. The puppet Gowther starts crying, not wanting Gowther to leave him and wonders if he is leaving him because he was a puppet. Gowther denies it, saying that he was no mere puppet and that he had poured all the soul magic he could into the heart in his chest. And that this was his first and last gift to him. Gowther tells the puppet that 3,000 years in the future, unfortunately something will happen and he will lose his soul and memory, as he believes what his friends Diane and King told him. Gowther explains that for Diane this may be a small encounter, but for him once-in-a-lifetime friend-making encounter. He then asks Diane to be friend of Gowther, when she returns in the future, but as he remembers she took her memory in the future, he asks her to forget what he said. But then the puppet Gowther asks Diane to show him the right way and she agrees to do so. As a gift of gratitude, Gowther restored Diane's memory.

King was heading back towards the tower. He was trying to make it in time and wonders if Gerheade was his trial, as Gloxinia may not have protected her. But as she was alive in the future, he wonders what that means.

Rou was fighting members of the Stigma, while Gerheade was trying to stop him. As he was not listening to her, she stood in front of him. Rou asks her if she would kill him and that he was fine with it. Another human then came attacking a fairy and Gerheade, injuring her eye and cutting her wings. As the man cut Gerheade's legs, Rou killed him. Gerheade then woke up moments later with Rou holding her. He questions her why did not she kill him, and Gerheade explains that when she mentioned her brother, she saw anger and grief inside of him and a face of a girl that looked like her. Rou tells her that she was a childhood friend of his and he though they will be together when they grow up, but she died before that can happen. He reveals that the giants and fairies had attacked his village, killing everyone while he and three other kids were away in the mountains. The only reason for the attack he could think of was that they were nursing a demon that was collapsed back to health, but the demon he still remembers was a nice guy. Since that they, they trained in single goal in mind, to get their revenge on Stigma. Rou thought to himself that what he did here, was not different from what they did to them back then. Rou then wonder what Meliodas will think when he sees this, as he was a good guy and that Gloxinia will probably kill him on sight, but Gerheade says she will explain all to him and that she also committed unforgivable sins, as she wanted the war to end sooner, she turned a blind eye to Ludociel's atrocities. Gerheade then laughs for a bit, as the face of Rou's friend had turned into her even more and she felt all Rou was thinking was about her and that was heart-warming. Rou then tells her he needs to heal her wounds fast.

King finally was reaching the tower, when he sees Rou who was holding Gerheade. Thinking he could not protect his "sister" again, King gets angry. Gerheade tries to explain the situation, but Rou assures her it was fine and he was prepared. As King's rage grew, he unleashes an attack with the spear. He saw Rou smiling and remembered how Ban did the same and later he learned he provoked him and took on his spear. King then manages to stop himself, but as he looks up, Rou's upper body was gone. He then looks behind him and see Gloxinia enraged and had killed Rou. King then woke up back at the present. Gloxinia then approaches him, knowing what he chose to do. King wonders what happened and Gloxinia tells him, its what he saw and that he did not managed to restrain himself and killed Rou. And as that was not enough to quell his anger, he turned against Stigma and humans, as they failed to protect his sister. In the end he became one of the Ten Commandments, without even realizing his sister lived., as he did not even think of checking out if she was alive. Gloxinia then wonders why King did not kill Rou, and King explains that real evil was pretty rare and that everyone he fought were forced into by certain circumstances. Someone he considered lowlife became special to his sister, though Rou may be that for Gerheade, so when that thought crossed his mind, he stopped himself. King wonders if he experiences the real Holy War or an illusion and Gloxinia explains that it was real and he could have died anytime. He managed to return, because he made different choice than him, as history was not something easy to change. If he had made the same choice as him, he would have stayed and went into the same path as Gloxinia. King then started feeling pain and Drole explains it could be a side effect of the spell or something else.

Diane start getting worried about King, so she decides to go after him. Then a strong magic is felt from the tower and Gowther realizes his executor had come. Seconds later, Zeldris appears in front of them.

Retrieved from "https://nanatsu-no-taizai.fandom.com/wiki/Wrath_of_The_Gods_Episode_6?oldid=149489"
Community content is available under CC-BY-SA unless otherwise noted.