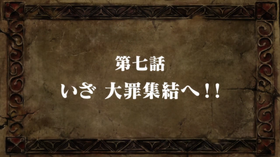 Deadly Sins Unite!「いざ、大罪集結へ！！ Iza, Taizai Shūketsu e!!」 is the seventh episode of Season 3 of the The Seven Deadly Sins anime.

In order to come back to present time, Diane has to choose between joining the Ten Commandments or die at the hands of Zeldris. However, Diane chooses a third option, which give her the opportunity to reunite with King. Having her memory back, they resume their romantic relationship. They eventually fullfil their promise to the demon Gowther by coming back to Liones to help their fellow Sin Gowther to regain his emotions but as soon he sees his heart he runs away.

Both Gowthers and Diane (still in Drole's body) are surprised by Zeldris, the Demon King's representative who is there in order to capture Gowther following his father's will. Gowther is aware he will need much of his magic for him to escape. But before he can fight back, he is protected by Diane who offers to fight off Zeldris so he can end the Holy War as soon as possible. However even when Diane uses Drole's magic power at full, she is defeated thanks to Zeldris' ability to seal her magic.

Zeldris, seeing in Drole potential for an alliance, ask him to choose between dying at his hands or joining the Ten Commandments. Zeldris also reveals he knows his background as an outcast among giants for his appearance and magic power, which makes Diane realize she and Drole are very alike. Meanwhile in the present, King wonder why Diane has not awaken yet. Drole states that is because, unlike Gloxinia, his motivations for joining Ten Commandments were compromised: As leaving the battlefield meant a dishonor worse than death in the Giant Clan, Drole had no choice but joining the Demon Clan. Drole reveals that the purpose of the test was to know what the right decision was, becoming one of the Ten Commandments or dying as the Giant King. King realize then that no matter what Diane chooses, she will never be able to come back.

King weeps desperately thinking Diane will never wake up, but to his and Drole's surprise, she suddenly awakens. Drole demands to know what Diane chose in his situation, to which Diane says she just ran away, leaving Drole perplexed. Soon afterwards she grabs King and kisses him, telling that she loves him.

King awakes convinced that what just happened it was a wonderful dream, but Diane appears form behind him and reveals it did actually happen. She also says her memory was restored as a reward of original Gowther as she does not believe Gowther is that awful. Diane then tells King she had and will always love him. She asks King if he still loves her and he tells her that he does and will always be by her side and then kiss her back. Embarrassed about the kiss, Diane asks King how is his back and he notices that some small wings had grew on his back.

King wonders where Gloxinia and Drole are. Diane points to Gloxinia who finally reunite with Gerheade after many years. Gloxinia apologizes to his sister for abandoning her but she tells him it is okay and she is glad he is safe and sound. The moment is interrupted by an angry Oslo who sees Gloxinia as a threat. Once Gerheade calms him down she reveals to her brother that the Black Hound was born shortly after he left and he has been protecting her since then. Gloxinia recalls the last words Rou said to Gerheade before dying and he realizes Oslo is Rou's reincarnation.

Diane and King are more motivated than ever to fulfil their promise to the demon Gowther for guiding Gowther in the right path. Then they use Oslo's teleporting abilities to return to Liones.

In Liones, the rest of the Seven Deadly Sins are gathered at the tower were they were originally framed, following King Bartra's premonition of their upcoming reunion. Then, King and Diane suddenly fall from a portal. They are glad everyone is there including Gowther and grieve Meliodas' death. Meliodas reveals then he is alive after all which scares off King and Diane. King apologizes to his captain for not trusting him. However Meliodas is curious about his newly sprouted fairy wings and Ban mockingly laughs at him, claiming they look like baby fairy's wings.

Diane then reveals she has regained her old memories again to everyone's surprise, especially to Gowther who was sure her memories should be gone for good. She states precious memories for her are carved deep down her soul and cannot be erased. She then invites Gowther to find his missing "heart". King Bartra sees the perfect chance to make his entrance and tells everyone he found a strange device, while holding a heart shaped item. Seeing it Gowthers remembers something and quickly decides to ran, jumping down the tower.

Bartra then shows the heart to everyone, explaining that Gowther once told him it was filled with soul magic. Diane is not letting Gowther get away, so she asks Merlin to make her small again and lead the rest of the Sins after Gowther, as Meliodas recites the fourth of their laws, saying that if one of them is in trouble, the others will become one and go help him. Then, the Sins jump off the tower in chase for Gowther.

Retrieved from "https://nanatsu-no-taizai.fandom.com/wiki/Wrath_of_The_Gods_Episode_7?oldid=149025"
Community content is available under CC-BY-SA unless otherwise noted.