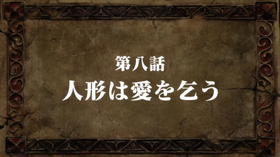 The Doll Seeks Love「人形は愛を乞う Ningyō wa Ai wo Kou」 is the eighth episode of Season 3 of the The Seven Deadly Sins anime.

After the Seven Deadly Sins are reunited again, following Diane and King's lead, they search for Gowther who escapes after seeing his heart and remembers his past of how he got the title of the "Goat Sin of Lust".

The Sins went looking for Gowther, Ban asks Meliodas if he knew Gowther was a puppet and Meliodas reveals he did and also knew the one that created him, a wizard so powerful that even the Demon King respected. Because of his power, he was chosen to be the Selflessness of the Ten Commandments, a Commandment that makes anyone with selfish desires to lose all memories and emotions and because of that the Demon King imprisoned him. Because of that he created Gowther, to serve him as a proxy to the outside world. He based Gowther's appearance on the woman he loved, but made him male, so that he does not have lust desires.

At the same time, Gowther wonders if he really had a soul and why did he ran when he saw the thing in Bartra's hand. He ends at a castle, wondering why he came, but then he gets a memory flashback. As he can not understand whats that, he decides to use Lost World on himself to erase all of his memories.

45 years ago, Gowther wakes up in cave and a girl appears with a lamp. As they both surprise each other, both starts to scream. The girl calms down first and apologizes to Gowther that she startled him. As Gowther calms down too, she introduces herself as Nadja, and asks if he is a boy or girl, to which Gowther says a boy. He then pokes her breasts, saying that she must be a girl, but receives a slap from her. She then asks him why he was there, but Gowther had no memory of it and thinks he was always there, but Nadja explains they are under Liones, a major Kingdom on par with Danafor, but Gowther did not knew about it. Nadja then realizes she is late and have to go, but Gowther stops her asking her to not leave him. Nadja then promises she will be back tomorrow.

Nadja goes on the surface, where her brother Bartra was waiting there, asking her why she went alone exploring. Nadja explains that there is a huge cave under Liones, just as Bartra saw in his dreams and that she met an interesting boy.

Gowther wanders around the cave and realizes that 3,000 years had passed and he was in the old Fairy King's Forest. He then remembers about the real Gowther and goes to where he last saw him to find him to find his dead body. He remembers the gift that Gowther had given him. In that moment, Nadja comes back, telling him that she has a present for him, but Gowther does not want it, as think she will then leave him. She realizes Gowther had cried and to cheer him up, she gave him one of her favorite books, a story of adventure full of excitement and thrills. Nadja then starts telling him about the main character and that she has a poor health and can not leave the castle, and because of that she always reads books. She tells Gowther that if he can not read it, she will read it for him, but Gowther tells her he had already just read it all. He finds the story interesting, but wonders about main character long hair and how he gets in full armor, as he explains Gowther changed his hair to knee long blond hair. Seeing that Nadja finds it amazing, wondering if he is a wizard, but Gowther tells her he is a puppet made by a wizard. He reveals his magical heart, saying it is filled with soul magic, but as Nadja wonders if that is possible, she feels pain and passes out.

Nadja later wakes up in her room, wondering what happened. Bartra who was by her side, explains that she was found unconscious by a maid near the basement. He asks if something scary had happened with the boy she mentioned before. Nadja says yes and explains that while Gowther is not the main character from the book, a wizard or even a human, she feels very drawn to him, which is a bit scary. Gowther then shows himself from behind the curtains and Nadja realizes he heard everything. Bartra explains it was Gowther that brought her back and he being dressed as maid he can come to her room without the soldiers getting suspicious. Gowther then hugs her, saying that he is happy she did not hate him and tells her he does not want to go back down there and be alone. Since that day, the started spend their time together.

Gowther eventually spoke with Bartra, asking if he really foresaw he and Nadja meeting. Bartra explains that he occasionally has dreams of the future and they are accurate. He then tells Gowther that he had another dream in which his sisters was truly happy and asks Gowther to stay to her side. Later he was with Nadja, who apologize for having to stay in bed today. He mentions that Gowther was like a baby when she met him, but now no one would think he is a puppet. But Gowther tells her that he is not a person and will likely continue to exist hundreds of years as his body is artificial. Nandja tells him they are no different and the inside both have same kind of soul. Gowther then asks Nadja if she will disappear as her heartbeat is constantly getting weaker. Gowther then mentions the Gowther who created him, and how he used to see though his eyes and move through his body and that his final words were, he that he hopes to achieve the dream he could not. But as he did not reveal what that dream was, Gowther did not knew. Nadja tells him that he is probably already achieving his dream, to touch things by himself, to hear with his ears, to feel, Gowther the kisses her. Nadja then says to herself that Gowther also fulfilled her dream, to spend her last hours with him. She then passes away. As Gowther realizes she is not breathing, he starts yelling now wanting she to leave him and teach him many other things. As guards hear him, they go into Nadja's room to find Gowther standing above her, he had ripped his heart and gave it to her, hoping it will revive her, but the guards though he killed her and started beating him.

Gowther was arrested and found guilty for seducing the princess and killing her in cruel fashion. His sentence was to be burned at the stake. Denzel wants to get revenge on him for killing his sister, but Bartra stops him, saying that this was not what happened. As Gowther was burning, he though that if having a soul is so painful, it is better he to not have one and that he wants to forget everything and just be a puppet.

Back at the present, before Gowther is able to erase his memory, Diane stops him. She realizes that he tried to erase his memory and it must had mean he started to remember something. Diane manages to hold him, but he asks her to release him, as he wants to erase his memories as he did in the past too. Merlin the shows up, saying she realized the reason for his psychological instability. She tells him that each time he starts to remember, he violently rejects his memory. Diane kept trying to persuade Gowther to not erase his memories, saying that even among painful memories, some can mean a lot him. Gowther then starts to remember Nadja and his time with her. Merlin the explains that she looked into it, but inside the magical heart, there never was any soul magic, so Gowther's soul is inside of him as it always has been. Gowther then returned his memories, with his original powers. Meliodas and Ban the came, and Meliodas realizes there was no need for them to come. As the rest of the Sins came too, Merlin says its time for celebrations and Ban says its captain's buying. Diane wonders what was that heart then, and Merlins guesses its just a keepsake meant to console a son who grieves over being a puppet.

Retrieved from "https://nanatsu-no-taizai.fandom.com/wiki/Wrath_of_The_Gods_Episode_8?oldid=146920"
Community content is available under CC-BY-SA unless otherwise noted.