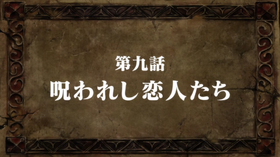 The Cursed Lovers「呪われし恋人たち Norowareshi Koibito-tachi」 is the ninth episode of Season 3 of the The Seven Deadly Sins anime.

A familiar of Merlin's searches the demon-occupied Camelot for Arthur but it is found by Zeldris, who shoot a curse at Merlin through the familiar.

Merlin recovers enough to attend the party celebrating the seven Sins reuniting before anyone looks for her but leaves soon afterwards, tired. Diane asks how Gowther's creator ended the Holy War, as the general idea was that the Goddess Clan sacrified themselves to seal the Demon Clan, but Gowther refuses to answer, saddened. Diane has told Elizabeth there was a Goddess who looked just like her with Meliodas 3,000 years ago. Elizabeth remembers Cain saying there was an Elizabeth (Liz) at Danafor that was also Meliodas' lover.

Meliodas helps Merlin walk to a bed as she nearly collapses from the side effects, guessing Zeldris ambushed her. She tells Meliodas she can not lose Arthur, while Escanor eavesdrop behind the room's door.

Elizabeth asks Meliodas about the coincidences with her namesakes but Meliodas does not answer.

Merlin is feverish the next morning and when Elizabeth tries to heal her, she telepathically meets Zeldris. Zeldris calls Elizabeth a cursed goddess that is still torturing Meliodas. She has been dying, losing the memories of her past life, reincarnating, and meeting Meliodas - and has done that dozens of times already. The Elizabeth of the present day is the Goddess Elizabeth from 3,000 years ago. Elizabeth is happy as that means she has always been with Meliodas but Zeldris says she has been torturing him and forcibly returns her memories of her past lives so she can see how sinful she has been. Merlin wakes, recovered. Elizabeth leaves to get some air alone, pleased she can remember her time with him.

The Seven Deadly Sins set out to free those in Camelot, leaving Ban tortured. The barrier around the city is held by Melascula and if they kill her, the spell keeping Elaine alive will end.

Elizabeth becomes entangled in the memories of her past lives, shouting about tragedies that happened millennia ago. Her eyes glow orange, Goddess eyes, and then she collapses.

In despair, Meliodas tells the others if all her memories return, she will die in three days.

Retrieved from "https://nanatsu-no-taizai.fandom.com/wiki/Wrath_of_The_Gods_Episode_9?oldid=145099"
Community content is available under CC-BY-SA unless otherwise noted.