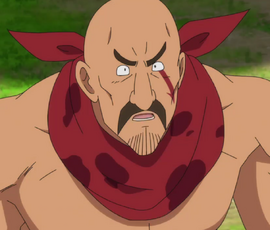 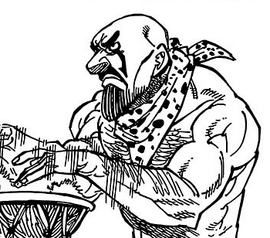 Zalpa「ザルパ」 is a member of a savage tribe that saved Matrona's life after she was fatally poisoned by Gannon and his Holy Knights. He now lives with her and his two children, Sol and Della.

Zalpa is a large, muscular man with a bald head and tattoos under his eyes. He has both a large nose and a large chin with a short beard. His bandanna around his neck and his pants both have a spotted, tribal pattern.

Zalpa seems to be a kind man, saving Matrona from dying by cutting her leg off to stop the poisoning, even though she was a stranger to him. He's also let her take care of his kids, showing trust towards Matrona.

Fifteen years ago he participated in the battle between the Savage Tribes and the Holy Knights, who were aided by three members of the Giant Clan. Among them was Diane, who spared the man, allowing him to escape.

A few days later, he found Matrona fatally poisoned, and nursed her back to health for three days straight without rest.

Seven years later he had two children, Sol and Della, with his now-late wife.

He now lives with Matrona and his children.

After Matrona rescues Diane from the Ten Commandments, she brings her back to Zalpa. Zalpa plays the drums while Matrona performs Drole's Dance. He is later seen catching fish with his children.

Zalpa appears to use a spear for hunting fish.[2]

He is also a skilled drummer, playing the beat for Matrona as she performs Drole's Dance.[3]

Retrieved from "https://nanatsu-no-taizai.fandom.com/wiki/Zalpa?oldid=150372"
Community content is available under CC-BY-SA unless otherwise noted.