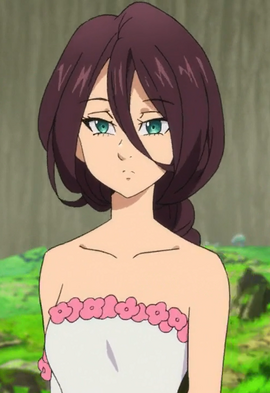 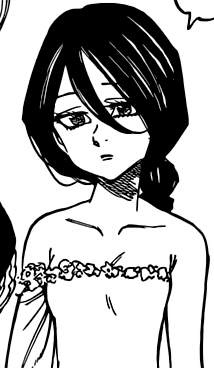 Zaneri「ザネリ」 is a former member of the Goddess Clan, as well as one of the heads of the Druids along with her sister Jenna in their sacred land Istar.[1]

Zaneri original appearance
Zaneri wears a white shirt-gown combination, cut off at the shoulders. She has long dark hair, tied in a braid.

Unlike her energetic and cheerful sister, Zaneri is very serious at her job as head of the Druids, never showing a smile and not being too fond of outsiders. However, Zaneri seems to have a fondness towards Meliodas, having feelings for him and like Elizabeth, having no problem with him groping her whilst Meliodas shows no interest in her as seen when she held his hand to her chest and he pulled it away. Despite her calm nature, Zaneri does get annoyed if anyone disobeys her, which is shown every time she scolds Elizabeth for not focusing on her trial. Despite this, she does have a caring side, as she worries about Meliodas not being able to handle the trial and wanted to pull him out, however, after being stopped by Elizabeth, she chose to believe in him.

During the Holy War, holding doubts about the war and feeling uncomfortable with the way the Goddess Clan saw things, Jenna and Zaneri escaped. Some time after their defection, they encountered the twin sisters who were the original owners of their current bodies. As the sisters were too damaged beyond their powers to save, they earned their permission to borrow their bodies and pretended to be human to escape the battlefield undetected. Several years after the end of the war, the sisters eventually become the heads of all the Druids, now living in the sacred land of Istar.

Zaneri and Jenna were still heads of the Druids when the trolls and their queen came and attacked Istar which luckily, the Seven Deadly Sins came and saved the Druids, but destroyed their altar by mistake. However, Zaneri was not upset, as she ends up growing feelings for the Deadly Sins captain, Meliodas, who does not share the same feeling to her dismay.

When the Seven Deadly Sins and their friend entered Istar once more for training and to regain Meliodas's strength, nearly everyone thought Theo was the head of the Druids, but to their surprise, he was the protector and fifteen years old, while Jenna started to mess around with Hawk while explaining that she knew they were coming. Zaneri later greeted Meliodas but placing his hand on her chest which he let go and shows dislike towards Elizabeth as she seems aware of Meliodas feelings. Later, Zaneri took Meliodas and Elizabeth to Istar tower where they start Meliodas trial on whether to return his strength back or not by placing him through a trial, showing him the day when Danafor fell and the death of Liz. While Meliodas does his trial, Zaneri gives a trial to Elizabeth to heal a plant. Unfortunatly, Elizabeth has a hard time staying focused on said trial because of being worried about Meliodas, being repeatedly scolded by Zaneri every time she wanted to help him. While Meliodas was slowly losing himself to the trial, Zaneri wanted to pull him out, but Elizabeth stopped her and told Zaneri to believe in Meliodas, which later he manages to pass the trial by keeping his emotions in control instead of forgetting them which surprised and stunned Zaneri. When Meliodas left to train with the others, Zaneri continued to test Elizabeth, but soon failed, but was given an outfit to fight in battle.

After the Deadly Sins went out to stop the Commandments and find Escanor, Jenna stated that despite them being a raucous group, she will miss them. However, Jenna soon points out that Zaneri sabotaged Elizabeth's trial by not placing the seed in the pot, which causes Zaneri to break down, revealing that she didn't want Elizabeth to stay close to Meliodas because if he lost her again, Meliodas would be heartbroken as Elizabeth is the reincarnation of Liz, Meliodas dead lover.

Zaneri is seen along Jenna watching from Istar as the Demon King stands with a new, gigantic and monstrous vessel created from the same land of Britannia. Frightened, Zaneri wants Meliodas to leave that place.

As a Druid, Zaneri is knowledgeable in the spells of Druids. She uses the Memory Spell to test Meliodas in Istar.

Retrieved from "https://nanatsu-no-taizai.fandom.com/wiki/Zaneri?oldid=143704"
Community content is available under CC-BY-SA unless otherwise noted.