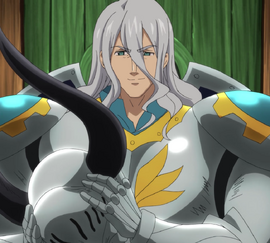 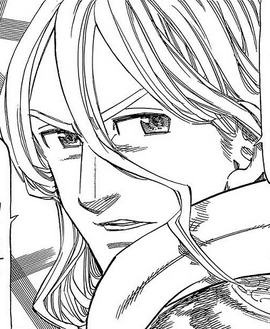 Zaratras「ザラトラス」 is a Great Holy Knight and was once the strongest in the order of Liones' Holy Knights before his death ten years prior to the beginning of series.

He is also the father of the Holy Knight, Gilthunder, and was the Seven Deadly Sins' superior during their time as Holy Knights for the kingdom of Liones, prior to them being framed for his death.

Zaratras is a man with long shoulder length silver hair and blue eyes. He wears full-body copper and white armor with the Holy Knight crest.

He wears a suit armor with the symbol of the Holy Knight on him. He also wears a cloak or cape.

Zaratras is a kind and refine man who use his Power, Purge to remove evil spirits and believed in the Seven Deadly Sins like Bartra does, but tends to scold them whenever they are being careless. Zaratras would seem to be serious and tough, but actually he is rather soft, silly and overemotional, to such a degree that Hawk believed he was a fake upon their first meeting. However, Elizabeth mentions that he is much better on the job. He displayed regret, blaming himself for being poisoned despite knowing something is up with Hendrickson's evil pressure and had no self-control over his favorite food. Despite this, Zaratras still hold his kind nature as he does not blame Hendrickson or Dreyfus as he blames himself for not saving them from the Demon's control.

Zaratras traveled with Bartra Liones to the destroyed location that was Danafor and found Meliodas injured while carrying the infant Elizabeth Liones. Worried about him, Zaratras tries to seek medical attention while having him give the infant, but Meliodas refuses to let go of "his woman", leaving a confused Zaratras.

Sometime later, Zaratras tells Meliodas that Elizabeth will be the king's third daughter. Meliodas accepts this, in exchange to be one of his Holy Knights. Zaratras took it as a joke until Meliodas beat him in combat.

Sometime later, Zaratras, while being drunk, notices Meliodas' young appearance. After Meliodas stated that he's at least 3000 years old, Zaratras is surprised about how long he has lived for and would imagine himself wanting to get killed due for possibly having many regrets.

Doni, a Holy Knight Vampire, came to Liones to spread and possess more humans to become Vampires under the order of the Vampire King, Izraf. However, this plan was soon cut off when Zaratras appeared and defeated Doni easily and used Purge to free Doni who thanked him as he died. Zaratras later ordered the Deadly Sins to go to the Kingdom of Edinburgh to defeat the Vampires which they did and celebrate.

Zaratras was killed by his brother Dreyfus and his accomplice Hendrickson. Following Dreyfus' order, Hendrickson poisoned the Great Holy Knight to weaken him before the two finished him off. He was later discovered dead by the Seven Deadly Sins, who were then framed as traitors.[3]

Meliodas mentions that they found him dead when they entered the castle, where they had been summoned to meet with him.[4] Later, his son, Gilthunder, mentions that the reason he wants to kill the Seven Deadly Sins is for avenging his father's death and also for proving that he has surpassed him.[5]

Zaratras is one of the souls who were brought back to life by the magic of Melascula.

After receiving an invitation from Drole and Gloxinia of the Ten Commandments to participate in the upcoming festival with a wish granted to the victor, Zaratras (disguised as a Holy Knight named Silver) traveled to Vaizel and managed to complete the labyrinth stage with several more of the contenders who passed too as well. With the official start of the Great Fight Festival, Zaratras is provided a Blue Demon as a partner, since there were no one else available. However, he kills it amidst the confusion while in awe and surprise of the powerful effects of Escanor's Charge and Fire. After Escanor manage to heavily injure Drole and Gloxinia, leading Meliodas to strike back as he planned, Drole soon takes all the participants as hostage with one of his techniques until Gilfrost teleports everyone, except Meliodas, safely back to Liones Castle. Zaratras and the others watch the rest of the battle through a crystal ball, seeing how Meliodas has the upper hand until the rest of the Ten Commandments show up and eventually is stabbed to death by Estarossa.

One month after Meliodas' death, the Ten Commandments have taken over Britannia and have devoured many souls to regain their strength, as Arthur and his knights try to battle against them. During that time, Zaratras came across the Boar Hat, now run by Elizabeth and Hawk. Zaratras reveals himself to the group and explain that he was likely brought back from the dead by the Ten Commandments magic, but not as an angry and ill-willed soul, as Zaratras held a grudge against himself for not saving Hendrickson or Dreyfus from the demons control. As Zaratras asked to see Meliodas, Elizabeth take him to the bedroom where she kept Meliodas' dead body and explains to him that she couldn't find him in the Capital of the Dead. Zaratras brings up that once Meliodas told him that he wouldn't be killed simply by his heart stopping and that Meliodas told Zaratras about his "deaths" in the past. By using Druid magic, Zaratras take Elizabeth and Hawk through Meliodas' memories, to learn how he saved Elizabeth as a baby during Danafor destruction, being very close to her as she grew up, and talk about his curse that kept him alive for 3000 years. Later they visit the memory where Meliodas promised the toddler Elizabeth that he would come back one day alive, no matter what, giving the present day Elizabeth hope.

When the Ten Commandments invaded Liones, Zaratras hears of the villagers who had been evacuated. When he feels the great amount of power accumulating in the capital, Elizabeth decides to go and help her family. While they went there in the Boar Hat, Zaratras insists to the young princess that it is too dangerous for her, but this last one insists on going although Zaratras affirms that they can not have a moment of hesitation when going against the Ten Commandments. Along the way, they are attacked by a Red Demon. Zaratras protects Elizabeth using Purge to eliminate the demon. However, a whole battalion of Red Demons and Gray Demons follow, but Hawk Mama manages to eliminate them. When Zaratras is surprised by the transformation of Hawk when consuming a rest of Red Demon, the Commandments Derieri and Monspeet appears before them. Zaratras is intimidated by the single presence radiated by Monspeet who warns him that it is useless to face them, but even so, Zaratras attacks Derieri who was threatening Elizabeth, only to be neutralized by a simple hit of the demon. After Elizabeth uses Ark to prevent Derieri from killing Zaratras, she directs her attack on the princess, who is saved by a revived Meliodas. Zaratras is pleased to see Meliodas again, flooding his monstrous strength. While Meliodas dominated to Derieri in fight, Zaratras warns to him of the treacherous attack of Monspeet, which Meliodas reflects without problems with its Full Counter, defeating both Commandments.

When Hendrickson was about to be killed by Fraudrin, Zaratras intervenes using his Raijin no Shukusei. Hendrickson believes to be hallucinating to see the Zaratras that the same had assassinated, but Zaratras pulls the cheek affirming to him that it is not dreaming and that they must focus on releasing Dreyfus from Fraudrin's control. Together, Zaratras and Hendrickson manage to fight the Commandment, who declares that they will only succeed in killing Dreyfus. Knowing that the Purge is not strong enough to affect Fraudrin, Zaratras only sees a path of action. When Fraudrin is blinded by Hawk's breath, Zaratras catches him from the back and declares that he uses all his vital force to use a Purge strong enough to free his brother. After a free Dreyfus managed to wound an expelled Fraudrin, Zaratras compalce to know when he grew up. While the existence of Zaratras returns to touch its end, this one does not regret, since the only one had taken that second life in order to save to Dreyfus. While Hendrickson and Dreyfus lament for everything they did, Zaratras scolded them that they should take responsibility for their actions and as a last wish, he asks them to let Gilthunder know that he is always watching over him. After this, the body of Zaratras fades and his soul returns to the Capital of the Dead.

As a former Great Holy Knight, Zaratras is very powerful. He was once called the strongest Holy Knight before he was killed.[6] Dreyfus stated that Zaratras is the only individual who's a match in power with the Seven Deadly Sins. Fraudrin of the Ten Commandments even acknowledges his power.[7]

Zaratras is a highly skilled swordsman. Meliodas considered him invincible during their training sessions. He is also extremely fast, having severed Doni's limbs simultaneously in the blink of an eye.

As a Druid, Zaratras possess abilities related to them, like a spell capable of entering the memories of other beings.

Zaratras wields a broadsword, through which he channels his lightning magic.

Zaratras is Gilthunder's father. It is shown that Gilthunder greatly loved his father, and was furious finding out that Hendrickson and Dreyfus killed him and wanted to avenge him.

Even though not much is known about their relationship as brothers, Zaratras seemed to care a lot about his brother, Dreyfus, as he fought with all his force to free him from Fraudrin's possession, even if it meant for him to die again. He's also disappointed with himself for not being able to save Dreyfus ten years ago.

Not much is known about their relationship, but Zaratras held a deep grudge in himself that he couldn't save Hendrickson from Fraudrin's control.

Retrieved from "https://nanatsu-no-taizai.fandom.com/wiki/Zaratras?oldid=151795"
Community content is available under CC-BY-SA unless otherwise noted.