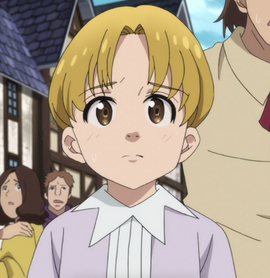 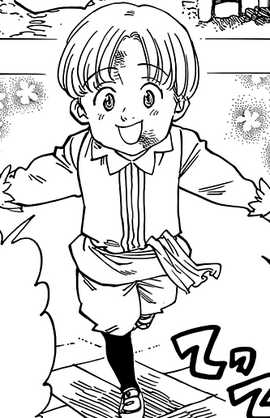 Zeal「ジール」 is the younger brother of Guila, and the son of the disgraced Holy Knight, Dale, who mysteriously disappeared while on a mission.[1] Due to the apparent betrayal of his father, he is repeatedly attacked by delinquents in his town while his sister is away on duty.[2]

Zeal has a short, clean hairstyle and wear common light green clothes with a ribbon around his waist.

Zeal is shown to be a sweet, young boy who remains in high spirits even when under constant bullying. He looks up to his older sister, Guila, and shows a dislike towards the Seven Deadly Sins due to their conflict with the Holy Knights.

Zeal was the son of a Holy Knight, Dale. Not much is known about Zeal past, but at some point, his father mysterious disappeared and his older sister, Guila, was left to take care of him. Despite the bad rumors of his family, Zeal still loves and believe in them.

After Guila returns home from her mission at the Capital of the Dead, Zeal warmly welcomes her back; ignoring her questions as to how he received a bruise on his face, and instead complements her new hair cut given by Meliodas. As she hugs him, he tells her not to overwork herself or get hurt, and not to lose to the Seven Deadly Sins. She then apologizes for leaving him alone all the time, as he is relentlessly bullied while she is gone. As they talk, Guila catches a stone thrown through the window by three men who insult the two, calling them "disgraces of Holy Knights". Zeal confides to his sister that though he knows their father's disappearance led to many deaths, he still has faith in him. When he asks if she became a Holy Knight for the same reason, she states that her reason for becoming a Holy Knight was to protect him, and to be someone whom he could be proud of. Zeal replies that he is fine even if he is by himself, which leads Guila to notice multiple cuts on his hands, and she softly kisses him on the forehead.[3]

While the Deadly Sins were fighting the Holy Knights, Zeal look at the battle, and wonder if Guila is okay. Diane of the Seven Deadly Sins was sent flying to a nearby town where Zeal was and it was believed she was attacking the town. Zeal notices Guila, when a building starts collapsing above. Without thinking, Diane leaps and dives forward to protect Zeal, causing herself to be completely immobilized by the collapsed building. Zeal thanked Diane for saving his life. This selfless act prompted Guila to defect from the Holy Knights along with Howzer. As the two renegade Holy Knights made up their minds whose side they're on, Zeal tries to peek out only to be told by Diane to stay down. Later when Helbram uses Death's Call of Inferno through Link, Zeal was affected but Diane managed to interrupt the Cardinal's attack to save the boy's life again.

When King battled Helbram, the mad fairy attempts to kill Zeal and the others with the Sacred Tree Roots, only to be stopped by Chastiefol's Form Eight: Pollen Garden. Later on, Zeal regains his consciousness and carries his sister's spear as Dreyfus' Holy Knights and the Seven Deadly Sins agreed on a truce and decide to work together in order to thwart Hendrickson's appalling plot to revive the Demon Clan and rescue Princess Elizabeth. After being joined by Meliodas, Gilthunder, and Margaret, the group heads to the castle to rescue Elizabeth, but Vivian interferes and teleports the group to a forest. Fortunately, they are soon sent back to Liones by Arthur's cloaked friend who is soon revealed to be Merlin of the Seven Deadly Sins.

Zeal is also shown during the festival alone at their dinner table, empty plates surrounding him and looking depressed. This seems to suggest that Guila abandoned Zeal to spend time with Gowther, contradicting her former devotion to her brother. This is later revealed to have been due to Gowther's brainwashing of her as he became interested in learning the feeling of love rather than friendship and as a result brainwashed both her and her brother by manipulating their memories, including making fake ones and showing real ones to have Guila be his lover to show him the feeling of love.

After discovering it, Diane enters in conflict with Gowther demanding to repair the memories of both. There, Gowther uses his Blackout to put almost the whole kingdom unconscious, including Guila and Zeal.

Eventually, Gowther returns Zeal and Guila's memories to normal, who apologizes to Zeal for abandoning him.

When the Ten Commandments invaded Liones, Zeal was in the basement along with the other women and children of the castle under the care of Jericho. However, Zeal and everyone in the basement are taken hostage by Grayroad, who locks them inside her eggs to slowly turn them into her demon servants. Merlin after uses her magic to enclose the eggs inside large pillared ice to prevent its hatching. When the battle is over, Zeal is freed from the ice by Merlin.

When the Holy War unleashed, Zeal is among the people who sacked the Holy Knights who were heading to the battle, asking his sister to return safely.

With the end of the Holy War, Guila and Zeal meet Jericho on the streets as they head to the celebration. When Zeal calls Jericho "teacher" and says he will be under her tutelage from the next day, Jericho prmise to make him work hard. Guilla asks Jericho about it and Jericho explains that Zeal wants her to train him in swordfight to one day be a knight who can protect his sister, to which Guila is very moved. The three then meets with Matrona, Gerheade and Puora.

Zeal attends the celebration in the new Boar Hat. There, she is seen drinking a non-alcoholic beverage along Jericho and Guila.

Zeal is an ordinary child with no super-human abilities. However, despite his small stature, Zeal is able to carry his sister's spear that is at least twice his size.

Zeal is always talking about his sister, Guila, and loves her very dearly; declaring that he will bear anything for her sake. She, in return, loves him equally; having made a similar declaration stating that for him she will do anything.[4]

He confides to his sister that he greatly respects his father, exclaiming that despite the rumors he had turned traitor, he still believes in him.

Retrieved from "https://nanatsu-no-taizai.fandom.com/wiki/Zeal?oldid=150401"
Community content is available under CC-BY-SA unless otherwise noted.