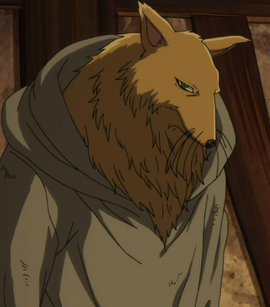 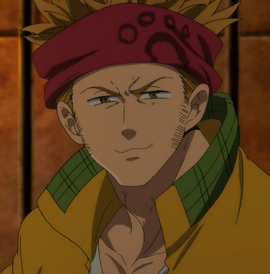 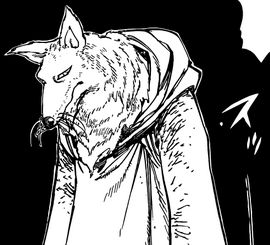 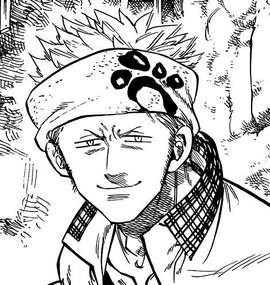 Zhivago「ジバゴ」 is a werefox who was imprisoned at the Aberdeen Prison and who raised Ban in his youth and taught him how to steal.

Zhivago in his human form appears to be a young man with short spiky hair that's covered by a bandana. He wears an open shirt with a patterned collar above a dark V-neck shirt, a belt at the waist, and dark trousers with a pair of light colored boots.[1]

However, this is not his true form. Zhivago is a beastman, specifically a werefox, having the features of a yellow colored fur walking fox with a peculiarly large neck.

When he reunites with Ban, he wears a simple ragged hooded cloak.

Zhivago seems to be caring, sharing some food with a young Ban, despite not knowing who he is. This is further proven when he offers Ban to bust out of the prison with him. He also shows great morality and kindness as he was greatly pleased when Ban told him that he trusts him. However, despite considering Ban a son of his, Zhivago knew his priorities and went to save his own son rather than Ban when a band of knights found out his son's home.

Sometime before Ban was imprisoned, Zhivago was in there as well and had apparently found a way to escape the prison.

At Aberdeen Prison, Zhivago saw Ban in his same cell, where he offered the boy some food which Ban accepted gluttonously. He asked Ban if he wanted to bust out of the prison with him and commented on Ban's not so childish eyes. He asked the boy his name and when Ban returned the question, he stated that his name is Zhivago.[2] Successfully escaping the prison, Zhivago took Ban to his hideout where he offered him more food. He told Ban that he has a son around his age and asked him his age, but Ban didn't know himself while Zhivago commented on his rude mouth then telling him to never speak of this hideout.

While Ban was kidnapped and being taken to Lady Roxanu to be sold, Zhivago, being the bandit he is, robbed the cargo he was on. Ban busted out of the barrel and Zhivago was surprised to see him there, taking him away and again helping him with food while mocking him. Ban asked Zhivago to teach him how to steal, but the latter warned him about its consequences and how his life will never be the same. Ban fell asleep soon after.[3]

The next day, Zhivago was showing off his stealing to Ban. However, when Ban tried to steal, he ended up getting caught and Zhivago snatched him back. At the hideout, Zhivago told Ban about the Fountain of Youth and its guardian saint much to Ban's fancy who suggested they go drink it but Zhivago warned of the guardian again. Ban asked him about his son again and Zhivago responded that his name is Selion, and that he's a shy and sweet boy. He continued to say that he has another kid, a mean brat with a sulky look on his face and a foul mouth, and that his name is Ban. He explained why he only visits his home at nighttime, and that his son knows of his theft habit. He asked Ban if he trusts humans and Ban replied that he trusts him, which caused Zhivago to force the boy into his embrace, telling him to get some sleep for the next day.[4]

The following day however, Zhivago had overslept and rushed quickly to where he was supposed to meet Ban, but it was too late. He overheard that a Werefox offspring was sighted in the mountains with the group of knights heading there to dispatch it, and saw Ban getting beaten severely by the guards. To save his son, or the kid whom in him he trusts? Zhivago discarded his human form in public and rushed to the mountains, crying for Ban to forgive him. By the time he got there and killed the knights, Selion was already at the verge of death, dying in his arms soon after.[5]

Zhivago is blamed as the being who revived a dead person, and as soon as Ban hears that, he beats up the humans ganging up on him and takes him to the inn. There, Zhivago has already stolen Jericho's wallet which Ban retrieves for her. Ban asks him if he's really brought a dead person back to life and the Werefox replies that humans are stupid entities, blaming whatever they don't understand on Beastmen like him. When he goes to leave, he collapses due to illness and is quickly put to bed. He tells Ban that humans will never know how it feels to live only on stealing.[6]

He tells them that he didn't expect humans to sympathize with a Beastman, and that he can finally join his sons in the afterlife. Jericho questions again and he tells her that he had two wonderful sons before. He tells Ban that his eyes remind him of one of them's, proceeding that had that kid been alive he'd be a man at the prime of his life. He tells Jericho that the boy is more than likely dead, and that he was too afraid to show his face in the village again, had he made a different choice he wouldn't have lost everything.[7]

Ban interrupts and tells him that he made the right choice, Zhivago, annoyed by his response, hears Ban saying that had he abandoned his true son to come save him, he wouldn't have forgiven him which shocks him greatly. Ban continues to say that he never hated nor resented him, and he was his ideal father, which puts the Werefox into tears who hugs the Deadly Sin, realizing that his wonderful, bad-mouthed son is standing before him.[7]

After a heartwarming father and son reunion, Zhivago and Ban talk about the rumors of dead people coming back to life, such as a deceased wife who strangled her husband to death and an order of killed knights wandering around. He notices Jericho and asks if she's Ban's lover, to which Ban bluntly denies, much to her dismay. The Beastman notices Ban's physique of a 20 year old when he's supposed to be in his 40s, which Ban confirms that he drank the Fountain of Youth and became immortal, much to Zhivago's shock, confirming its existence to the old Beastman. However, Ban tells Zhivago about what he did to Meliodas to save Elaine, and how Meliodas forgave him even though he doesn't deserve it. Zhivago tells Ban that he has such a wonderful friend, continuing that he should not hate himself and that he should just ask for forgiveness. Zhivago says that these are his last words to him as his father.[8]

Later, Ban pays his farewell to the Beastman in his grave while pouring booze on it.[9] However, when Ban's soul was extracted by Melascula, Zhivago's soul (in his human form) switched places with it to allow the Fox's Sin of Greed to live, sacrificing his only chance of seeing his son in the afterlife. Despite Ban's futile and teary protest, Zhivago's soul was then eaten by Galand.[10]

Zhivago is an exceptionally skilled thief in his prime that he can steal anything in a blink of an eye without leaving any suspicion from his targets. As a Beastman, he is fast and can assume a human form and revert back at any time. He is also skilled in close combat, while his frail build and advanced years make it difficult to fight larger opponents, he can dodge blows with split second reactions, making it appear he took a blow and feigning injury to avoid further scrutiny.

Zhivago taught Ban how to steal and made him into a bandit. He held him dearly and considered him his own son. He had saved Ban from being sold to a child-killing noblewoman and despite protesting Ban's desire to learn how to steal, he taught him how to rob people without being noticed and how to burgle houses. He had grown close to Ban however he never revealed his secret as a werefox to him. Upon discovering that both Ban and his own son were in danger, he transformed in the city and ran to save his son who'd been found in the hills nearby, running away with tears streaming as he had to abandon Ban. After nearly 30 years later, he is found again by Ban and dies after realizing who he was and apologizing for his choice all those years ago.

Zhigavo had at first thought that Jericho was Ban's girlfriend. He told his story about his past to her before passing.

He loved his son very much. His son was aware of his actions as a thief but as they were werefoxes, he had little else in ways to support his son. He mourned the loss of his son and sacrificed his chance to see him in the afterlife to save Ban.

Retrieved from "https://nanatsu-no-taizai.fandom.com/wiki/Zhivago?oldid=153296"
Community content is available under CC-BY-SA unless otherwise noted.