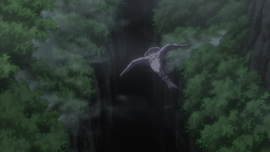 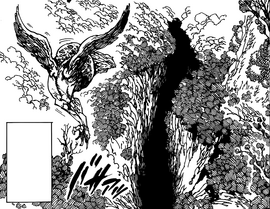 Zhuhur Valley「ズフールの谷 Zufūru no Tani」 is a small valley located 150 miles east from Liones and the same place where a certain group of the Demon Clan were set free.

Barely surviving Meliodas' Revenge Counter, Hendrickson manages to escape to that valley with the Coffin of Eternal Darkness but nearly dies due to the massive damage he suffered from the Dragon's Sin of Wrath. However, Fraudrin in Dreyfus' body appears before him and healed him, allowing the former Great Holy Knight to continue the ritual of unsealing the Demon Clan with the blood of Elizabeth Liones from the bandage cloth Fraudrin provided.

Upon the incomplete unsealing, nine members of the Demon Clan have appeared and their auras deeply terrifies a now-normal Hendrickson as Fraudrin updates the current situation to his fellow Demons, informing them that Britannia is now ruled by humans. Agreeing to the fact, they needed recuperation for the majority of their powers have been drained from the seal, the Demons left the valley for Edinburgh Hill, leaving a terrified Hendrickson behind.

Retrieved from "https://nanatsu-no-taizai.fandom.com/wiki/Zhuhur_Valley?oldid=136300"
Community content is available under CC-BY-SA unless otherwise noted.